There are 5,766 miles between Gateshead and Tokyo, and while the Japanese capital might have seemed like a million miles away at times in the biting cold, the wicked wind and the driving rain in the inclement north-east of England, the Wanda Diamond League season-opener produced no shortage of thrills, spills and surprises to whet the appetite for those delayed 2020 Olympics.

On an evening when Mondo Duplantis sampled the rare taste of pole vault defeat, Mariya Lasitskene finished out of the top three in the women’s high jump, and the innovate field event last-round top three shoot-outs produced some truly gripping drama, no-one devoured the opportunity to lay down a marker with greater relish than Dina Asher-Smith.

At the pre-meeting press conference on Saturday, the world 200m champion told the world she was “much, much stronger,” having taken advantage of lockdown to put in some serious graft. That new-found strength was clear for the 2,000 home crowd to see as the 25-year-old Briton powered out of the blocks in the loaded 100m final and surged clear of the hitherto-burgeoning US speed queen Sha’Carri Richardson.

Richardson arrived in Gateshead on the back of a trio of early-season sub-10.80 clockings back home but the 21-year-old could do nothing to stop Asher-Smith. The winning time, 11.35, was irrelevant, with the rain hammering down and, more pertinently, the trackside wind gauge reading -3.1m/s.

The gap, 0.09, was more telling, with Richardson the runner up in 11.44, Ivorian world bronze medallist Marie-Josee Ta Lou third in 11.48 and Jamaica’s three-time world champion Shelly-Ann Fraser-Pryce fourth in 11.51.

It was Richardson’s first 100m defeat since the US Championships in 2019. Not that Asher-Smith, who won her heat in 11.45 into an even stronger headwind (-4.4m/s), was talking up the significance of her victory, with 79 days still to go before the women’s 100m final in Tokyo.

“I think, all in all, today was more of an experience,” said the history graduate, who took world 100m silver behind Fraser-Pryce in 2019. “The only thing that can indicate Tokyo is the final itself.

“I feel really good. Conditions were far from ideal for sprinting but the most important thing is to come away with a good result and I’m very happy to do that. I want to stay focused, do well and get better from here.”

Richardson, who won her heat in 11.52 (-4.2 m/s), was far from despondent after her first Diamond League experience in Europe. “I’m happy with my race,” she said. “I need to go back and work on what I need to get better at.

“This won’t be the last time that I’m going to line up against these ladies and I want the world to know and the ladies to know that I’m here to compete just as well as they’ve done for many years. I’m here to show them what I’m good at.

“I’m definitely looking forward to some sunshine next week in Doha.”

Leg two of the Wanda Diamond League season in Qatar next Friday (28) is unlikely to produce the kind of snapshots that warmed the cockles of those watching the men’s pole vault.

While falling to defeat for the first time since the 2019 world final in Doha, Duplantis found the time and the goodness of heart to stand on the runway holding an umbrella to shelter Sam Kendricks from the elements. In return, the US vaulter who beat the future world record-breaker to the global title two years ago, ended the Swede’s winning streak of 23 competitions.

After first time successes at 5.30m and 5.55m, Duplantis could go no higher, failing twice at 5.74m and once in what proved to be the last chance saloon of 5.80m. Kendricks nailed the victory with a second time clearance at 5.74m, Britain’s Harry Coppell taking third with 5.45m.

“That was the most fun I have had all year!” beamed Kendricks. “You had people; you had rainy conditions; and we all had a good old rousing time out there.

“I haven’t beaten Mondo since the World Championships but I would never aspire to say we are on an even footing. He is on another level but perhaps the conditions brought us to the same level.

Duplantis was philosophical in defeat. “The conditions weren’t ideal but what can you do about it?” he shrugged. “I’m ok. I’m healthy. That’s the main thing.”

Seventh place in Dessau on Thursday had already rained on Lasitskene’s 20-month unbeaten parade but the three-time world champion was also out of sorts in the Gateshead rain. She dislodged the bar with her opening effort, at 1.84m, while dressed for the occasion with beanie hat, gloves and tights.

The 28-year-old had to settle for fourth place with 1.88m, an 8cm improvement on Dessau at least, while Poland’s 2017 world bronze medallist Kamila Licwinko prevailed with 1.91m, on countback from Britons Emily Borthwick and Morgan Lake. World silver medallist Yaroslava Makuchikh was a non-starter, while her Ukrainian rival Yuilya Levchenko finished down in ninth with 1.84m.

The decision to trial a sixth-round decider for the top three in the horizontal jumps and throws helped to distill the drama into a shoot-out style showcase.

Tajay Gayle boasted the best mark from the first five rounds of the men’s long jump (8.00m, 2.00m/s) but the Jamaican world champion found himself eclipsed by two inspired rivals when it came to the crunch.

Jumping first, Spaniard Eusebio Caceres sailed out to 8.04m (1.4m/s) but that was trumped by a 8.11m (2.8m/s) effort by Filippo Randazzo, Italy’s European U23 silver medallist. Jumping last, Gayle had to settle for third with 7.91m.

In the women’s shot, none of the final three could manage to save their best for last but the “putt-off” was still a compelling affair. Throwing last, having thrown 19.08m in round four, Portugal’s Auriol Dongmo secured victory with 18.16m. 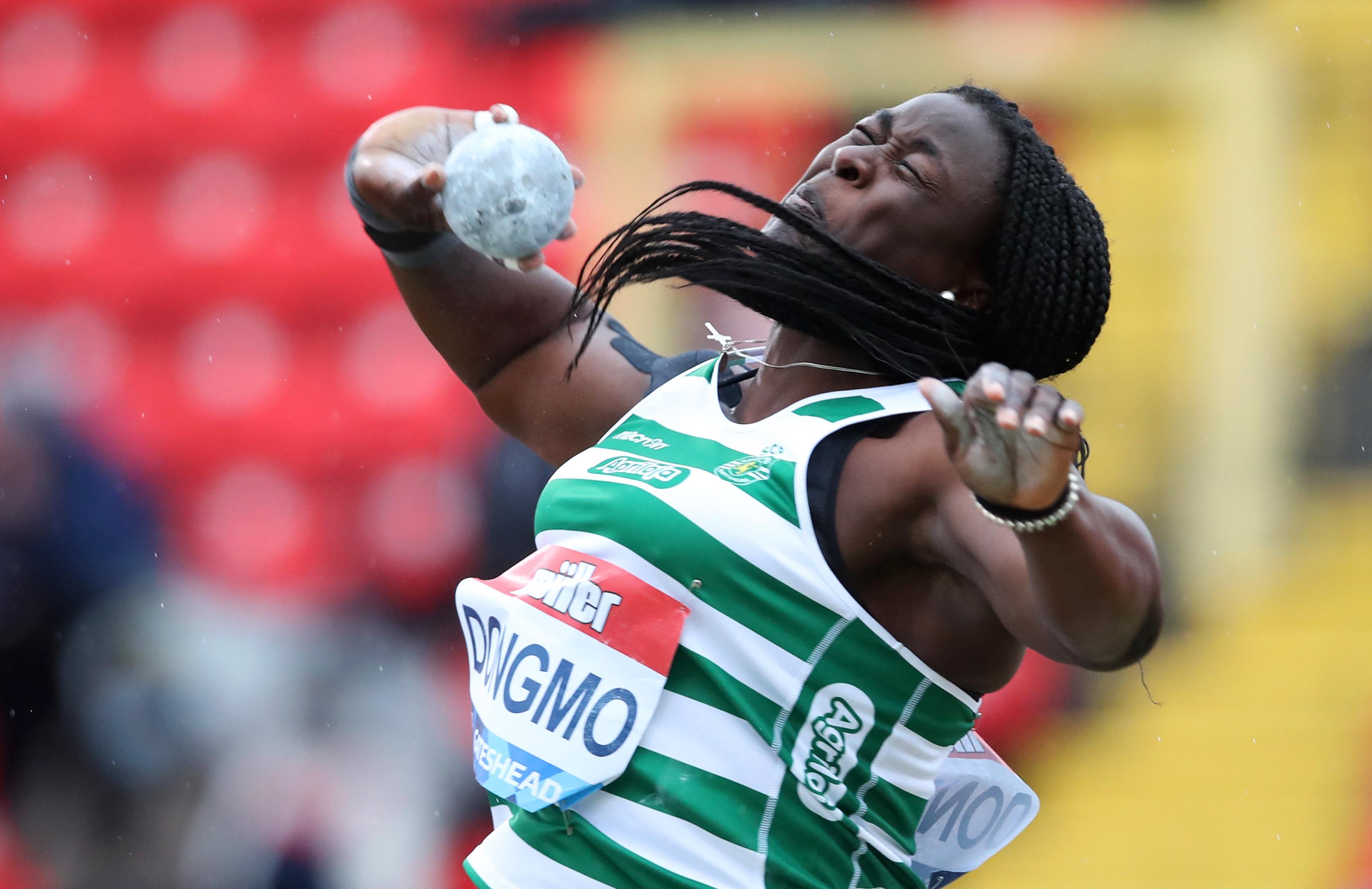 The European indoor champion prevailed by just 4cm from Jamaica’s world silver medallist Danniel Thomas-Dodd, with Maggie Ewen of the US third with 16.96m. All three had better performances in the earlier rounds: Dongmo 19.08m, Thomas-Dodd 18.46m and Ewen 18.54m.

On the track, aside from Asher-Smith in the women’s 100m, the stand-out performances came in the two 1500m races.

In the men’s event, European record-holder Jakob Ingebrigtsen was in assured form on his season’s debut, upping the pace when he needed to when the in-form Australian Ollie Hoare attempted to apply some pressure off the final bend. The Norwegian’s winning time was 3:36.27, with Hoare second in 3.37.32 and fellow Aussie Stewart McSweyn third in 3.37.32.

“This is normal weather back in the west coast of Norway,” said Ingebrigtsen. “It’s really tricky to run fast in these conditions and it turned out to be a tactical race.

“Today really didn’t have anything to do with the times, racing in these conditions, because all of a sudden if you get a sudden gust of wind then everything is ruined.” 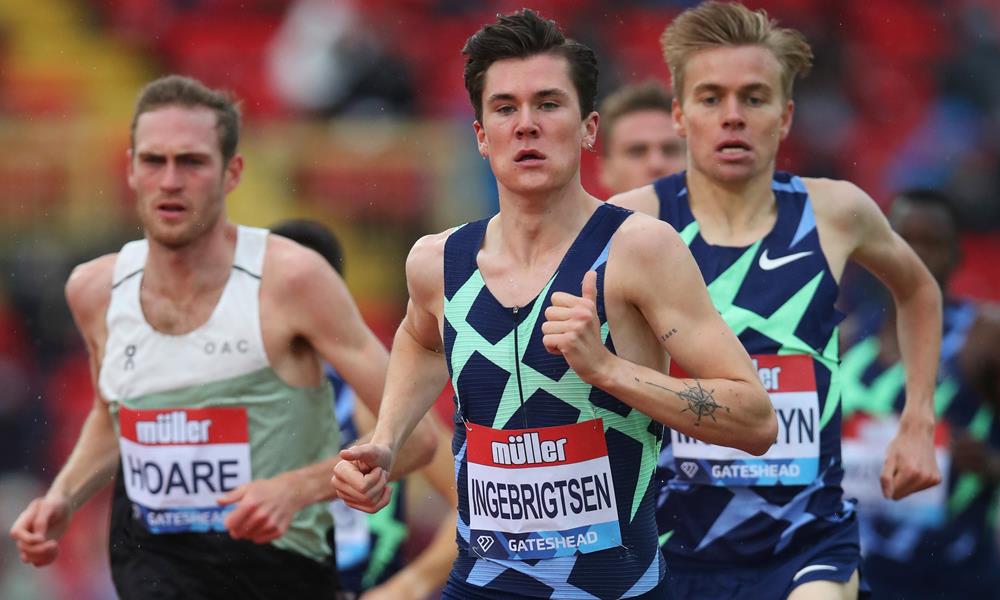 In the women’s race, Britain’s European champion Laura Muir left her nominal rivals floundering in her wake with a surge from 440m out that took her home in 4:03.73, exactly four seconds ahead of Moroccan runner-up Rababe Arafi.

“I’m really, really pleased,” she said. “I just wanted to sit in and use my strength over the last half, which I did. I felt really strong.”

The men’s 5000m might have lacked strength in depth but the race still proved to be a cracker, Nicholas Kimeli and Mohamed Katir slugging out a good old rousing duel, as Sam Kendricks might put it. Katir missed out on a medal at the European Indoor Championships in March, finishing fourth in the 3000m, but the Spaniard got the better of the Kenyan who paced half of Joshua Cheptegei’s 10,000m world record last year – 13:08.52 to 13:10.11.

Kimeli’s compatriot Leonard Bett also had to settle for second place, losing out in 8:31.52 in the 3000m steeplechase to the Kenyan-born Hillary Bor, now of the United States (8:30.22).