As the Tokyo Olympics approach, to help whet your appetite, Robin Bose from thegolfinghub.com, in India, spoke to Indian stars Anirban Lahiri and SSP Chawrasia about their memories of Rio in 2016 ‒ when golf returned to the summer Olympics after 112 years.

Golf was making a comeback to the Olympics in 2016 after a long gap, and the enthusiasm had rubbed off on all the stakeholders. But sport can be unpredictable and that finds no better expression than in Anirban Lahiri’s debut at the Rio Games.

Raised in an Army household, Lahiri was excited at the prospect of turning out in Indian colours. An integral part of the PGA Tour by now, helped by a joint fifth finish at the 2015 PGA Championship, the icing for him was partnering SSP Chawrasia. The two have engaged in iconic duels at the Hero Indian Open and spent time on the Asian Tour and European Tour. So, Rio was being looked at as one more contest with “deep and technical discussions on the short game” by the sidelines.

Since Lahiri knew for a while that he would play, the build-up to the Olympics was good. He finished runner-up to Chawrasia at the Indian Open and enjoyed a joint sixth placing on the PGA Tour. Missing the cut at the US Open wasn’t a dampener as Lahiri opened well at The Open Championship. He looked good for a strong finish but a shoulder injury going into Sunday at Royal Troon triggered a phase of “not so good golf”. 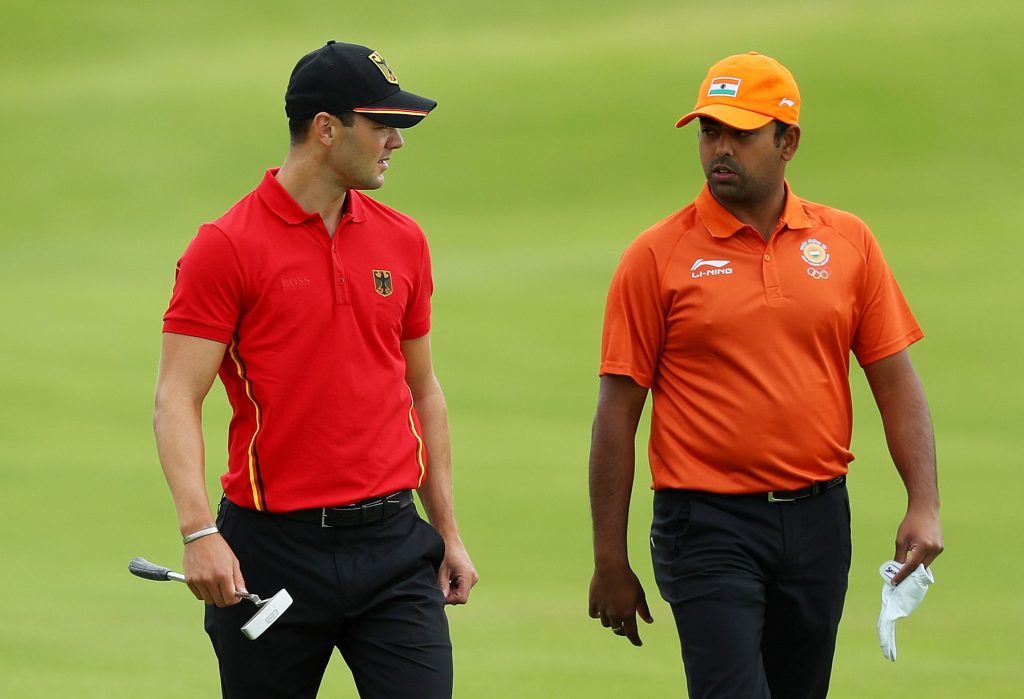 Martin Kaymer of Germany and Lahiri walk on the second hole during the first round of men’s golf on Day 6 of the Rio 2016 Olympics at the Olympic Golf Course on August 12, 2016 in Rio de Janeiro, Brazil. (Photo by Scott Halleran/Getty Images)

Lahiri wasn’t ready for competition, and proof was the missed cut at the PGA Championship. The strain of playing across America, Europe and Asia was showing, and led to the tough call of cutting down on tournaments in the coming seasons. Next up were the Olympics but there was no time to name a replacement because of visa restrictions and other paperwork.

Trying to get the best out of a tired body wasn’t the only challenge, wading through official red tape was another mountain to climb. The swing compromised due to the injury and the feel of his driver not right, Chawrasia came to the rescue by offering a spare club. Even then, Lahiri felt the heat and by the second day could not keep pace with the intensity.

As a proud Indian that is a regret and Lahiri is hopeful he gets a chance to complete “unfinished business and set the record straight” in another edition of the Olympics.

The memories outside competition were opposite to what transpired on the golf course. Seated next to Michael Phelps at dinner was memorable but equally inspiring was the story of the Indian judoka and wushu player Lahiri interacted with closely. “It made me realise how tough it is to pursue their love and getting to the Olympics is an achievement in itself. Golf figures way down in the list of disciplines, these guys are even lower down in the order. It was saddening but the struggle is inspiring,” said Lahiri. 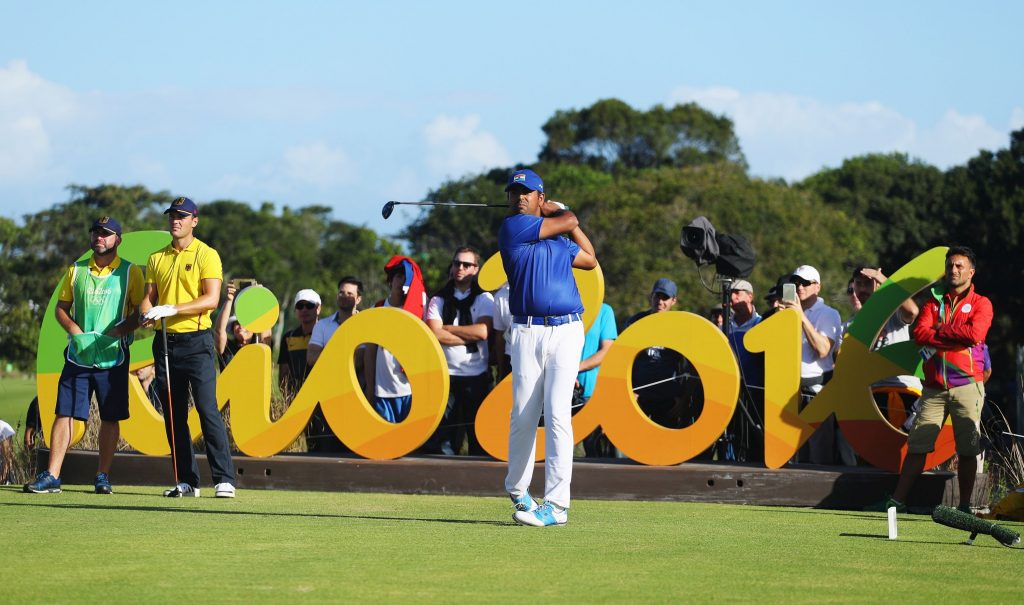 Lahiri watches his tee shot on the 16th hole during the second round of the golf on Day 7 of the Rio 2016 Olympic Games at the Olympic Golf Course on August 12, 2016 in Rio de Janeiro, Brazil. (Photo by Scott Halleran/Getty Images)

Rio, SSP and a new love

Like Lahiri, Chawrasia was fearful of not turning up at Rio in the best shape. It was the week of the Irish Open and discomfort in the C4, C5 and C6 discs prevented him from going through with the full swing. The pain was such that Chawrasia even contemplated pulling out of the following week’s BMW PGA Championship.

Timely advice from the European Tour doctor helped him get in touch with a neurosurgeon and the shot of cortisone worked like magic. Within half an hour, he could go through with the full practice swing. From pulling out to T27 on that Sunday, that was some progress. More than the pay cheque, it was relief. “I had to play the Olympics, else there would have been a lifelong regret,” said Chawrasia.

The fatigue of the long flight from Kolkata to Rio got washed away the moment he entered the Games Village. “There was so much of positive energy; it had to be experienced to be believed.” Chawrasia finished T50, seven rungs ahead of Lahiri, and though the final day 78 rankles, playing alongside Sergio Garcia stands out.

Through the week, friendships were struck that cut across sport and have stood the test of time. Sharing the three-bedroom apartment with Lahiri and a towering 6’3” judoka, the friendly banter in the evening is recounted with fondness. 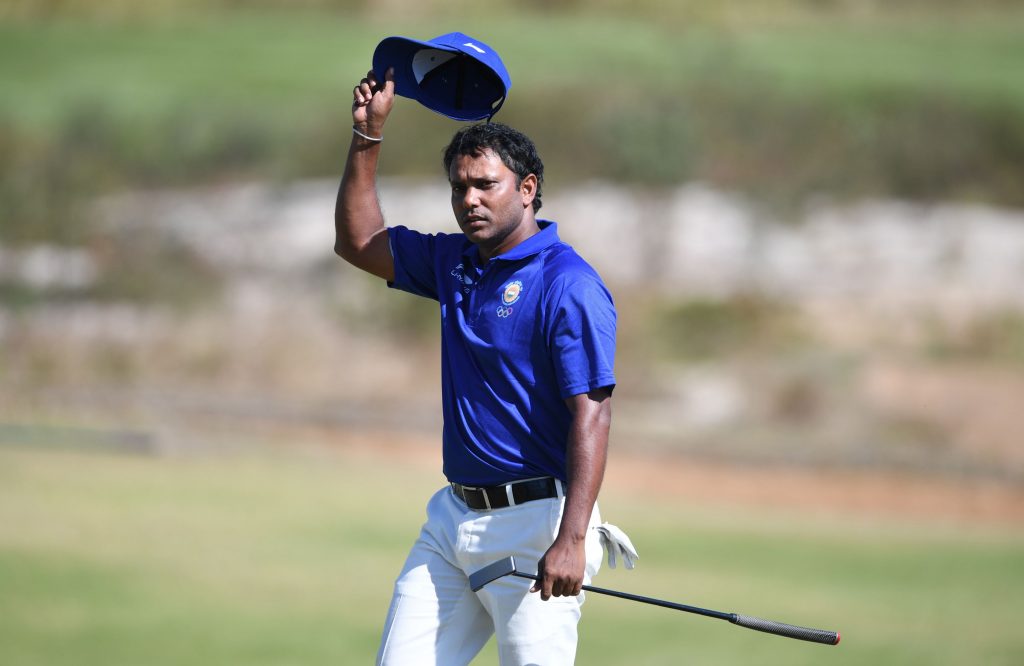 But the biggest takeaway for Chawrasia from Rio was junking tea and embracing coffee. The unavailability of tea in the 24×7 food tent had Chawrasia reaching out for coffee. Growing up in Kolkata, tea was his staple beverage but in light of its non-availability and the affinity for caffeine had Chawrasia making the switch. He started by adding a dollop of milk but the aroma of the coffee beans grew on him quickly and since then it has been two cups of black coffee a day.

What is missed is the unmistakable taste of Brazilian coffee and Chawrasia is still on the lookout as he traverses through Europe and Asia in search of his next international title.