Sentosa, June 18: The 18th hole of the Composite Course at the Hong Kong Golf Club, Fanling, has been the setting for a wealth of gripping and well-documented drama over the decades.

The impressive piece of golf course architecture as Simon Wilson attests, lends itself perfectly to a compelling finish, thanks to its design and sheer sense of history.

Though not a long par-four, by modern-day standards, it demands the utmost respect, and requires the fullest care and consideration — so much so that it will be featured in a forthcoming article by the Asian Tour’ called: “Asia’s toughest golf holes”.

The hole’s statistics at this year’s Hong Kong Open, tell a familiar story: measuring 410 yards, it was ranked the second hardest with an average score of 4.281; there were just 40 birdies, 215 pars, 101 bogeys, 19 double-bogeys and 2 “others”.

Australian Wade Ormsby’s dominant wire-to-wire four-shot victory in the event saw him able to negotiate the last hole without the heavy burden of a narrow lead.

But that is not very often the case for a hole deeply ingrained in the rich history of Asian golf, and viewed as one of the great amphitheatres of tournament golf globally.

Since the Asian Tour was launched in 2004, Fanling’s closing hole has witnessed the full gamut of emotions and eventualities.

And one of the game’s great personalities, Miguel Angel Jimenez, has been one of the main actors in the pure theatre that has unfolded there.

His most recent win was arguably his most spectacular when on an exhilarating final day he holed an 18-foot birdie putt on the first extra hole to defeat Welshman Stuart Manley and Prom Meesawat from Thailand.

When he triumphed in 2007 it was in very different circumstances; equally as exciting bur error-strewn and excruciating to watch.

He emerged victorious for the second time but only after a truly remarkable battle against Swede Robert Karlsson.

Tied for the lead playing the last, Jimenez was the early favourite after finding the back of the green in two while Karlsson’s approach failed to find the green and fell back into a grassy knoll in front of the putting surface.

To the dismay of the large crowd assembled, the Swede fluffed his chip shot and failed to make the green, before chipping his next shot to five feet.

Jimenez, facing a tough downhill putt and perhaps sensing victory too early, left his putt six feet short and then, to more groans from the crowd, promptly proceeded to knock his par effort past the cup.

It left Karlsson with an opportunity to make a bogey five and force a play-off but more agony was to follow when he missed again to complete his calamitous finish. Jiménez knocked in his bogey putt from one-and-a-half feet to seal the victory and bring to a conclusion one of the more perplexing finales to the championship.

“I like everything about this place,” said the Spaniard. “I like the golf course, it is an old fashioned course which provides a great test and I also like the heat, like Malaga. I am like a fish in water when it’s hot, it is where I am meant to be. I also like the people here, I feel very comfortable.”

Northern Ireland’s Rory McIlroy is another of the game’s greats who has played a significant role in the history of Fanling’s final hole. 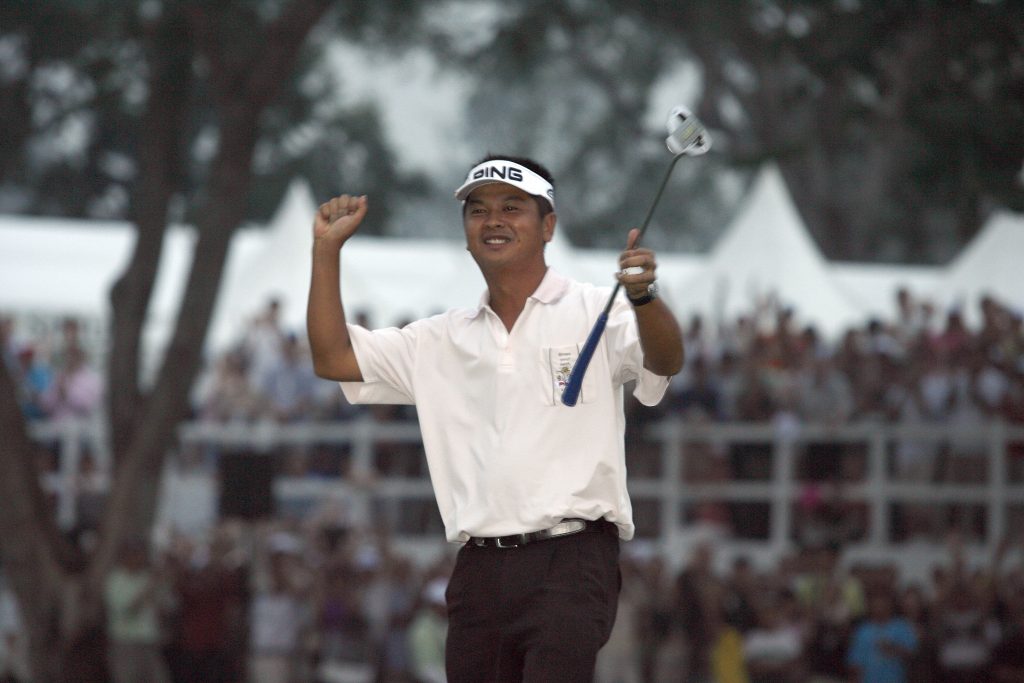 In 2008, he was on the receiving end of what can only be described as a golfing epiphany by Chinese Taipei’s Lin Wen-tang.

In arguably one of the event’s greatest-ever finishes he defeated McIlroy and Italian Francesco Molinari in a sudden-death play-off.

Lin had missed a chance to win the tournament in normal time when his six-foot birdie putt on the 72nd green slipped past the edge of the hole.

Molinari was eliminated at the first extra hole when he could only manage a par compared to birdies from the other two players. Lin’s birdie was the result of one of the finest shots seen on 18 in the Hong Kong Open: after hooking his tee shot he then played his approach out of trees, over water and a bunker. His shot not only found the green but finished just feet from the pin.

On the second extra hole, McIlroy also went left from the tee and had to display his powers of recovery to find the green. But Lin then piled on the pressure from the middle of the fairway, firing his approach in to just a foot. When McIlroy’s birdie effort missed, the tournament was Lin’s.

“Now I can re-assure myself that what I am doing is right,” said an ecstatic Lin.

“To hit two threes in a play-off, you can’t beat that,” added McIlroy.

McIlroy also finished runner-up the following year, behind Frenchman Gregory Bourdy, and was sixth in 2010 before finally securing the title in 2011 in remarkable fashion.

McIlroy, who at the time was the reigning US Open champion, holed out from a greenside bunker at the last to finish two clear of France’s Gregory Havret,

“I’ve wanted to win this tournament so badly since that play-off in 2008,” said McIlroy.
“I’ve had to wait a couple of years to get there, but to get this trophy in my hands is very special. I just hit a perfect bunker shot, and once it landed on the green, it never looked anywhere else and I think you could see how much that meant to me,” added McIlroy,

Over the last few seasons three Australians have also produced heroics on the final hole.
In 2014, Scott Hend and Filipino Angelo Que fought a thrilling back-nine battle which culminated in the Australian winning in extra time.

HONG KONG – OCTOBER 19: Scott Hend of Australia celebrates with the trophy after winning the final round of the 2014 Hong Kong open at The Hong Kong Golf Club on October 19, 2014 in Hong Kong, Hong Kong. (Photo by Ian Walton/Getty Images)

Two years later, Sam Brazel birdied the last to beat Rafa Cabrera Bello from Spain before Ormsby started his love affair with the tournament by winning in 2017.

Ormsby had a two-shot lead playing 18 but three-putted which opened the door for Cabrera Bello, playing the group behind, to force a playoff. However, the Spaniard finished second for the successive year when he made bogey after finding a green side bunker.

Perhaps, the greatest ever finish at Hong Kong’s national Open came in 1994 when little-known American Craig McClellan holed his second shot for an eagle two to force a play-off with South African star David Frost.

Frost overcame the American on the first hole of sudden-death but the reverberations of McClellan’s wonder shot lasted long after the winning putt was holed.

Just which is the best finish at the popular tournament is open for discussion but it will be complicated by the many more dramatic finishes in the future that help define the Hong Kong Open.