On reaching the age of 50, which Korean icon K.J. Choi did last month (May 19), it is usual to take stock and reflect on your life achievements.

For Choi, one of the region’s golf greats and an honorary member of the Asian Tour, his performance statistics and the good deeds done by his Foundation tell the story of a dedicated professional and a committed humanitarian who has met his goals both on and off the course.

A quirk of fate that saw him switch from powerlifting to golf aged 16, a dog-eared copy of Jack Nicklaus’ instructional classic “Golf My Way”, a solitary golf club and an admirable work ethic combined to kick-start his glorious career.

Choi taught himself the game by leafing religiously through the pages of “Golf My Way” and putting into practice what the ‘Golden Bear’ preached. It was a slog on a course two hours by bus from his home with day-long sessions that stretched into months and years, culminating in Choi turning professional in 1994 aged 24.

YEOJU-GUN, SOUTH KOREA – OCTOBER 23: K J Choi of Korea punches the air after a birdie on the 16th green during round four of the CJ Invitational at Haesley Nine Bridges Golf Club on October 23, 2011 in Yeoju-gun, South Korea. Photo by Paul Lakatos/Asian Tour.

He cut his competitive teeth on the Korean, Asian and Japan Tours. His won the 1996 Korean Open and after expanding his horizons beyond the Korean Tour won three times in 1999 – the Kirin Open and Ube Kosan Open (Japan Tour) and the Korean Open (Asian Tour), for a second time.

Choi became the first Korean to earn a card for the PGA Tour, via Q-School in 1999. Strikingly, Choi has played 468 tournaments on the circuit, won eight times, made 330 cuts and earned more than US$32.5 million.

Having hit his targets time and time again on the links, Choi has set himself a loftier challenge in society at large – ‘it is my life goal to help the children around me,’ he says.

To that end, his Foundation gives scholarships to less fortunate students to ensure they receive a college education.

Choi had planned to split his playing time between the PGA Tour and the Champions Tour from his base in the United States this year before the season was thrown into turmoil.

But Choi has not forgotten his roots and the opportunities afforded him by the Asian Tour as he improved his game to a level that marked him down as the ‘Asian player most likely to win a Major.’

On his frequent return visits to Asia, he has won several times including the Iskandar Johor Open in 2009 and the CJ Invitational in Korea back-to-back in 2011 and 2012.

Choi credits his time on the Asian Tour as the perfect proving ground for the PGA Tour.

“(My success) on the PGA Tour really stems from the years starting out in Korea, making my way gradually out into bigger arenas starting with the Asian Tour,” he said in a past interview.

“Definitely days competing on the Asian Tour really helped me a lot, I learned everywhere I went. All the tournaments I played I learned a lot and that was the foundation of my success (on the PGA Tour).” 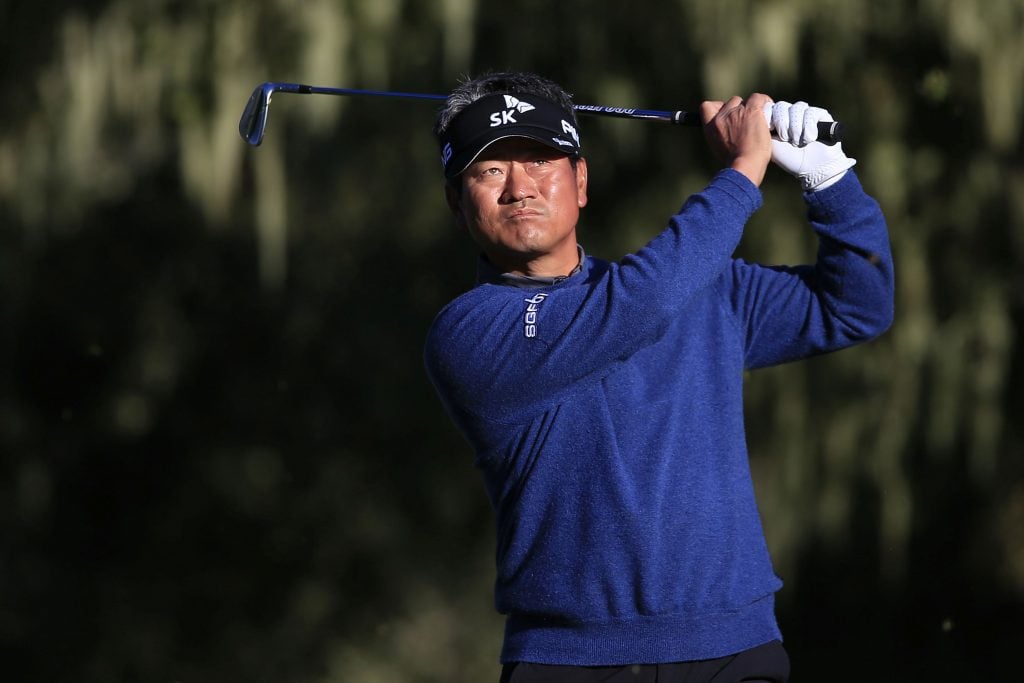 PEBBLE BEACH, CALIFORNIA – FEBRUARY 06: K.J. Choi of Korea plays his shot from the third tee during the during the first round of the AT&T Pebble Beach Pro-Am at Monterey Peninsula Country Club on February 06, 2020 in Pebble Beach, California. (Photo by Chris Trotman/Getty Images)

A goal-setter, Choi adopted the mantra of “to be the best, you’ve got to play with the best” and mapped out a path which he hoped one day would result in him winning a Major.

He felt his best chance was probably the Masters and practiced hard to perfect the shots he felt were required around Augusta.

His dedication nearly paid huge dividends with three top-10 finishes at the Masters (his best finish coming in 2004 when he was third) and six overall in Majors.

That countryman Y.E. Yang took the honours as first Asian to win a Major, by pipping Tiger Woods at the US PGA Championship in 2009, detracts little from the huge enjoyment and sense of pride Choi gave to Asian golf fans throughout his career.

His success is even the more remarkable given that as a teenager Choi, a promising powerlifter, did not have the vaguest notion about the ancient game of golf.

The tale of how he came to learn about the sport and the lengths he took in honing his game is both inspiring and revealing.

His official biography on kjchoi.net tells it best.

“Choi was born as the oldest son with two younger brothers and one younger sister. Both of K.J.’s parents were farmers on a small island called Wando, in the southernmost part of Korea.

“While attending his local high school, K.J. joined the powerlifting team. When K.J. was only 13 years old he could squat 350 pounds (approximately 159 kilograms), a feat for which he was later given the nickname ‘Tank’ by fellow South Koreans.

“One day when K.J. was 16, the powerlifting coach told the team to separate into two lines. One line would continue to practice powerlifting, and the other would begin to practice a sport called golf. Nobody in that golf line knew what golf was, including K.J., so he slyly left the golf line, thinking he had outsmarted his destiny and went back into the powerlifting line.

“Luckily the coach saw him change lines and demanded that he play golf. The coach gave K.J. a single golf club and a book written by Jack Nicklaus called ‘Golf My Way’. From that day on, ‘Golf My Way’ became K.J.’s holy grail, and he taught himself how to play golf.

“K.J. lived more than two hours from the nearest golf course, so he would wake up at 5 a.m. every morning and take the bus to the golf course and practice. K.J. would practice religiously until it got dark.

“Most of the people in K.J.’s community didn’t know what golf was and tried to convince his parents to make K.J. quit. People thought K.J. was wasting his time, yet after six years of practice and two years serving in the military, K.J. became a professional golfer.”

The rest, as they say, is golfing history.

His daughter Amanda, 18, had a drive-in graduation ceremony from Westlake Academy in Texas and his 23-year-old son David joined the Republic of Korea Marine Corps for his military service.

Choi said of his daughter: “We are so excited to see her proceed through life with passion and courage.”

And as his son left for Korea Republic, Choi commented: “David, you will always be in my heart. Miss you.”

🏌️Golf : All about the experience for Lahiri and SSP

newsdesk - June 15, 2021 0
Back in the stadium where she set her European 10,000m record of 29:36.67 last October, Sifan Hassan continued to make history by smashing...
Facebook RSS Twitter
© Copyrights 2020. Supperrb Media Network. All Rights Reserved.
wpDiscuz
0
0
Get rewarded for your opinion, please comment about this topicx
()
x
| Reply