Seven behind closed doors one-day events will begin with a tournament on June 18 at Brokenhurst Manor in Hampshire, organised by LET board member Liz Young and head professional Jason MacNiven.

Women’s professional golf will make a return to Britain this month with the news that Justin Rose and his wife Kate are to sponsor a series of women’s golf tournaments in the UK, starting on June 18.

The Roses decided to sponsor a women’s series after reading about LET professional Liz Young’s efforts to put on a competition at her home club in the New Forest, to enable local players to stay competitive, ahead of the LET’s return to golf.

Liz said: “This all started with an idea that myself and Jason had. We went to the club with it and we had great support from them. We had a vision from the start, get women competing again, increase the profile and visibility of women’s professional golf and inspire the next generation. Hopefully the players would embrace the chance to play, see that it could be done and maybe take it to their clubs.

“Thanks to Justin, Kate and his team, our dream has come true… in a week! I can’t thank Justin and Kate enough for coming onboard, creating opportunities and increasing the visibility for professional women golfers.

“I would also like to thank the Brokenhurst Manor Golf Club members. Their encouragement and support has been amazing from the start and I’m sure that with the news of Justin and Kate being involved, they will be as excited as I am. It makes me so proud to be a member of BMGC.”

Jason added: “It was a simple idea and concept – play for your own money and you get to enjoy competing again. We are delighted to have help from Justin and Kate as they can grow the series, which is what we initially wanted to do. We want to inspire the next generation and hopefully if this is an annual event, then kids can walk the fairways with their heroes. It is my duty to help the girls, it is time for me to put back into the sport and help the women, so it’s the right thing to do. Liz and I flew the kite and it has officially taken off!”

Club Manager Kevin Light commented: “Brokenhurst Manor Golf Club is delighted to host the first event of the upcoming Rose Ladies Series. Knowing that Liz had spoken about the LET schedule being the strongest in a number of years, only for Coronavirus to hit, we were only too happy to step in.”

It is understood that Justin Rose, the 2013 US Open Champion and gold medallist at the Rio 2016 Olympic Games, who won the scratch open event and set the course record at Brokenhurst Manor in 1996, was inspired to help Liz and the LET players as he felt it unfair that he will return to action on the PGA tour with the Charles Schwab Challenge at Colonial Country Club in Texas on Thursday, two months before his female counterparts can do so.

Justin said: “Professional sports people are not machines – we cannot just power on and go. We have to nurture our skills in order to rely on them when needed; usually under pressure.

“My wife and I felt it was an opportunity for us to help where we can. We are therefore delighted to say that we will be supporting a mini-series for ladies to take place in June and July. This will comprise a number of one-day events at some of the top courses in England. The prize money will be modest but we hope that the series will give our talented lady golfers the opportunity to showcase their skills. Sky TV have agreed to provide a package for viewers and the Sunday Telegraph will ensure the events are well reported.

“Needless to say, Kate and I are immensely grateful to the host clubs for making their courses available to us, and for the enthusiastic support of all those behind the scenes who make the tournaments run smoothly. 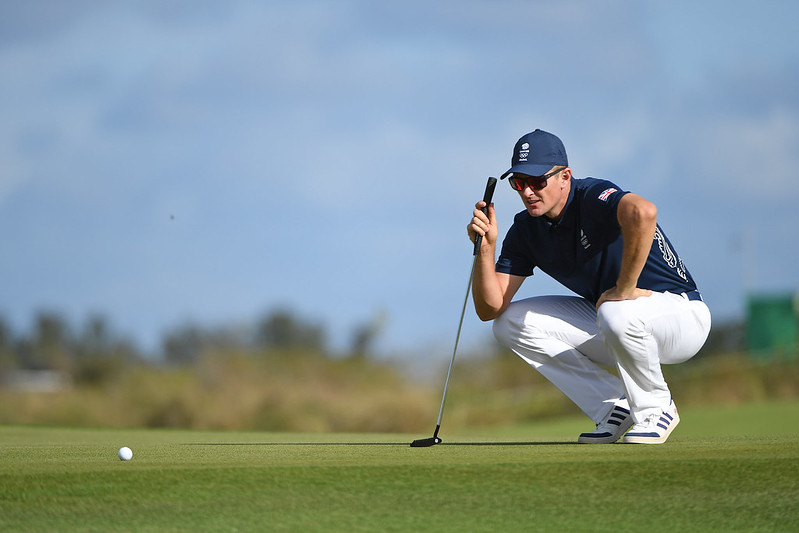 “Golf is a sport that is able to be played while socially distancing and hopefully the television coverage of the ladies competing can inspire more women and families in England to go out and try and play. It can be so beneficial for mental health to be out in the fresh air and get some space, especially in these challenging times.

“In particular, we are also grateful for the support and encouragement of the more established lady professional golfers for supporting this event. Through their participation they will encourage support for their sport and show the flame for ladies’ golf will not be easily extinguished.

“Golf has given me so much. As most of my followers know, I had my struggles early in my career, but at least I did not have to face a pandemic! I was still able to play. To be denied the opportunity to work or to play for months on end is very challenging, both physically and mentally. And that is why Kate and I feel it is so important that we want to try to do something about it.”

The LET is fully supportive of the Rose Ladies Golf Series and thanks Justin and Kate Rose for their incredibly generous support of women’s golf.