San Francisco, United States, August 5: Korean Joohyung Kim, the hottest young player on planet golf, will make his Major debut in the 102nd PGA Championship tomorrow with the world waiting to see what the brilliant 18-year-old can deliver next.

“This is an opportunity of a lifetime,” said Kim, on the eve of the first Major championship of the year which will see American Tiger Woods attempt to win his 16th Major.

The event is being played at TPC Harding Park in San Francisco, California, for the first time.

With five breathtaking victories to his name in less than a year, Kim will fly the flag for Asian Tour in the prestigious event alongside reigning Asian Tour Order of Merit champion Jazz Janewattananond of Thailand, as well as fellow Tour champions Kurt Kitayama of the United States and Shaun Norris of South Africa.

With $11 Million in prize money on offer this week, it will be the most lucrative event Kim has ever played since he turned professional in 2018.

His victory at the KPGA Gunsan Country Club Open last month – which was his first ever win on home soil and saw him become the youngest winner on the Korea Professional Golfers’ Association (KPGA) Tour – moved him into top-100 on the Official World Golf Ranking (OWGR) and earned him a place in this week’s star-studded field.

He added: “For me to crack top-100 and get into these Majors is just a feeling that you can’t buy. After winning in Korea, I booked my ticket and a week later I am in the United States. The dream is coming a bit closer, I am always trying to learn every single week.”

A gifted iron player, he took Asia by storm last year by winning three titles on the Asian Development Tour (ADT) – the region’s secondary circuit –before winning the Panasonic Open India in November on the main Tour.

The win in India saw him become the second youngest professional player to win on the Asian Tour at 17 years and 149 days.

His more recent victory in Korea – which came a week after he lost in a sudden play-off on the same Tour – showed that he has lost none of the momentum following his breakthrough season and also demonstrated he comfortably overcome a long layoff caused by the coronavirus pandemic.

“There was a lot of negativity to be honest,” said Kim, referring the pandemic.

“You live to play tournaments and when you don’t have tournaments for four or five months it kind of drives you a bit crazy. I remember those long nights when you are lying in bed and you have those thoughts in your head about whether or not I am still going to be able to continue good form when I come back. I worked hard for four or five months and it showed right away.

“A few weeks ago I was supposed to be playing in The Open and when it go cancelled it was tough. When I won in Korea, I definitely went into that week a bit more hungry. For me to finish 16 under on that course is great but to win as well was even better. I was 113th in the world before that and I remember waking up in the morning knowing I was 92nd in the world!”

It has been a meteoric and globetrotting rise for Kim. Born in Seoul, Kim has lived in various countries including Australia, China, Philippines and Thailand. He secured his ADT victories in Malaysia, Indonesia and Pakistan last year before claiming his Asian Tour breakthrough in India. His first win on home soil came shortly after he turned 18 in June.

The teenager is the son of Kim Chang-ik – a former Tour professional who played on the Buy.com Tour (now known as the Korn Ferry Tour) in the States before becoming a teaching professional.

Kim, who notched two commendable top-five finishes in four starts on the Asian Tour earlier this season, is not the only young maestro from the Asian Tour competing this week. 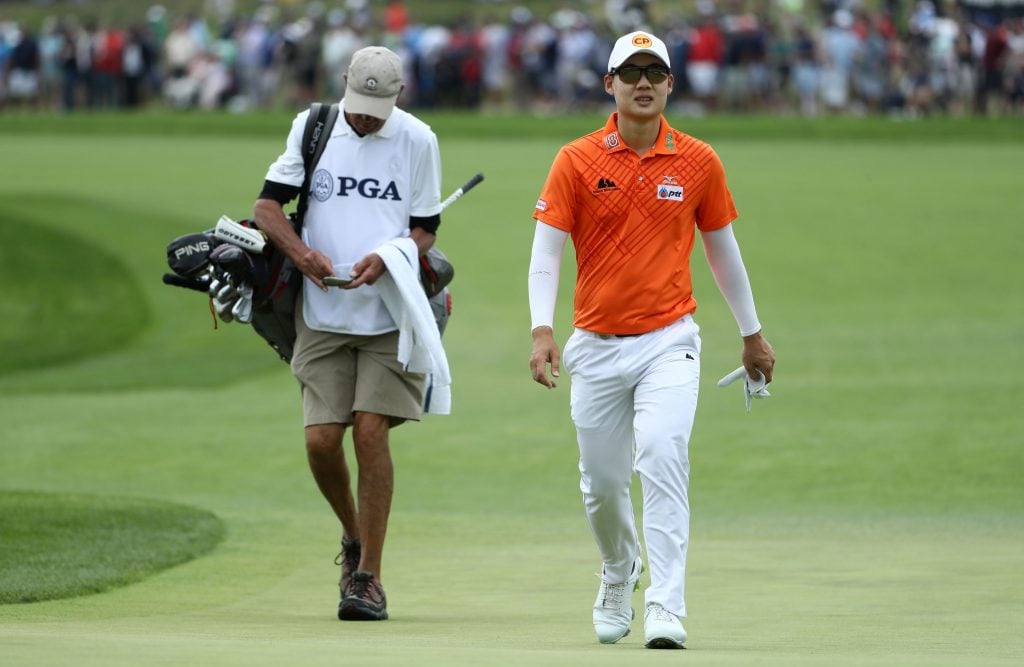 FARMINGDALE, NEW YORK – MAY 19: Jazz Janewattananond of Thailand walks along the fairway during the final round of the 2019 PGA Championship at the Bethpage Black course on May 19, 2019 in Farmingdale, New York. (Photo by Jamie Squire/Getty Images)

He finished in a tie for 14th on the Black Course in Bethpage State Park in New York.

The Thai star was actually in a tie for second place behind runaway leader and eventual winner Brooks Koepka of the United States after three rounds.

The Thai gave the galleries something to enjoy in a fearless display despite slipping back with a 77 on the final day.

“What happened today is good to have it happen right now, because I’m only 23 playing my second major,” Jazz said last year.

“If I finished too good, I could be lazy, I could be thinking I was a big shot. That humbled me. Now I know I need to work a lot harder.”

Kim will tee off at 8.55am local time alongside Mexican Abraham Ancer and Major champion Charl Schwartzel of South Africa while Jazz is set to get his campaign underway at 1.31pm with American Kevin Streelman and Matt Jones of Australia.