As 2020 draws to a close, let us look back at an unprecedented year which saw us kickstart the season on a high note, celebrating four worthy winners in four different countries, along with another successful staging of the Qualifying School. And while the COVID-19 pandemic forced an abrupt suspension to the Asian Tour in March, our members still excelled in other tournaments around the globe throughout the year.

A galaxy of stars, including 30 Tour champions, lighted up the new 2020 season at the Hong Kong Open in January. American Tony Finau made his debut appearance while Major champion Shane Lowry from Ireland returned to the prestigious tournament for the first time in 10 years.

Australian Wade Ormsby sealed the deal after cruising to a final round four-under-par 66 to win by four shots at the Hong Kong Golf Club. It was his second Hong Kong Open title and third victory on the Asian Tour. Ormsby also became the second wire-to-wire winner in the storied event following England’s Aaron Rai in 2018.

The week after, we celebrated another worthy champion in Matt Kuchar – who put up an inspirational performance to win the SMBC Singapore Open in what was his first attempt. The American overcame a calamitous triple-bogey on the seventh hole by charging back with three birdies to win by three shots at Sentosa Golf Club.

Former world number one Justin Rose of England finished in second place while 2019 winner and reigning Order of Merit champion Jazz Janewattananond from Thailand took outright third at the US$1 million event – sanctioned by the Asian Tour and Japan Golf Tour Organisation.

Korea’s Joohyung Kim came home in fourth place to claim one of the four tickets available to The Open at Royal St. George’s – which was postponed later in the year due to COVID-19. The other three spots went to Canada’s Richard T. Lee, Thailand’s Poom Saksansin and Japan’s Ryosuke Kinoshita.

The 2020 Asian Tour Qualifying School attracted a total of 458 entries from 37 countries across the globe. Zimbabwean Benjamin Follett-Smith finished top of the class with a one-shot victory in the final stage held at the Lake View Resort and Golf Club.

It was his third straight attempt at the Qualifying School and the then 23-year-old had led the grueling 90-hole battle from the second round. Follett-Smith, a one-time winner on the Sunshine Tour, was among the 35 graduates who successfully secured their Asian Tour cards for the 2020 season. 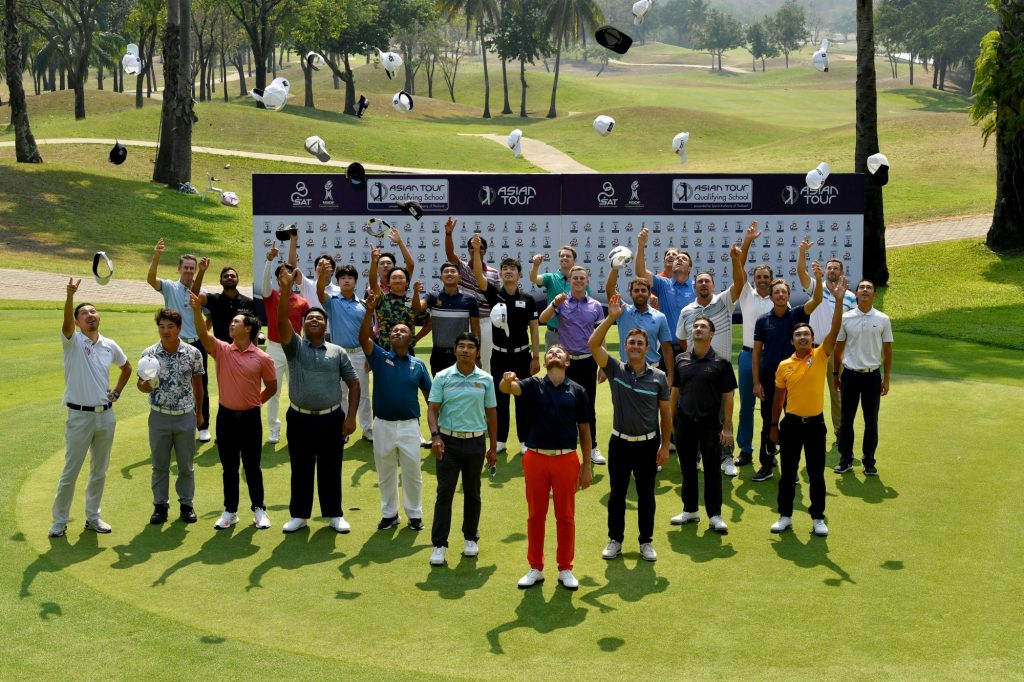 Australia’s Brad Kennedy held aloft the New Zealand Open trophy for the second time since 2011 after closing with a stunning eight-under-par 63 to win by two shots at the picturesque Millbrook Resort.

“I had always said 2020 was my last year. I’ve been playing 25 years on Tour and it was time to get home and spend some more time with my kids and wife. Who knows now? If I can still do it at 45 then I don’t know what’s going to happen, “said Kennedy following his victory.

Korea’s Joohyung Kim, who had led after the first three rounds, settled for fourth place after signing off with a 70. Thailand’s Pavit Tangkamolprasert capped his best result in three outings to the New Zealand Open following an 11th place finish.

In March, American Trevor Simsby picked up his first Asian Tour title after emerging triumphant on the second play-off hole against Andrew Dodt of Australia at the weather shortened event held at the Kota Permai Golf and Country Club, which is now an Asian Tour Destination.

Simsby, a graduate from the University of Washington where he played alongside PGA TOUR champion C.T. Pan of Chinese Taipei, was thrilled to claim his career biggest win yet in only his 12th start on the Asian Tour and first this season at the Malaysian showpiece.

The Bandar Malaysia Open, sanctioned by the Asian Tour and in partnership with the Japan Golf Tour Organisation, was reduced to 54 holes by officials following several weather delays. It returned to the Asian Tour schedule after a four-year absence.

The sports world faced unprecedented upheaval later in March due to the COVID-19 pandemic. But when the PGA TOUR and European Tour resumed their seasons in June and July respectively and the other domestic Tours in the region gradually restarted, our players made the most of their limited playing opportunities to cap an unforgettable year.

In July, Joohyung Kim from Korea won the KPGA Gunsan CC Open for his first victory on home soil, a week after losing in a play-off. The victory saw him break into the top-100 on the Official World Golf Ranking (OWGR) – thereby earning a coveted spot in the PGA Championship, where he made his Major debut the following month.

The same week, American David Lipsky, the Asian Tour’s number one in 2014, recorded his first win on the Korn Ferry Tour at the TPC San Antonio Challenge while Thai veteran Thaworn Wiratchant, at 53 years old, proved age is just a number when he emerged triumphant at the Thongchai Jaidee Foundation event held on the All Thailand Golf Tour.

Korea’s Soomin Lee emerged victorious on home soil the following week when he won the KPGA Open with SOLLAGO CC. Lee had prevailed with a birdie on the second play-off hole against compatriot Minkyu Kim in the modified stableford tournament.

In August, Thailand’s Gunn Charoenkul clinched back-to-back titles on the Thai PGA Tour following a play-off victory at the Singha-SAT Nakhon Nayok Classic. This followed his win in the Singha-SAT Hua Hin Championship.

“For the first time in my life, I have won back-to-back on a Tour!” said Gunn, who became a first-time dad earlier in January. “This is also the first time that I fought my way back to win. It will benefit me in terms of mental toughness from now on.” 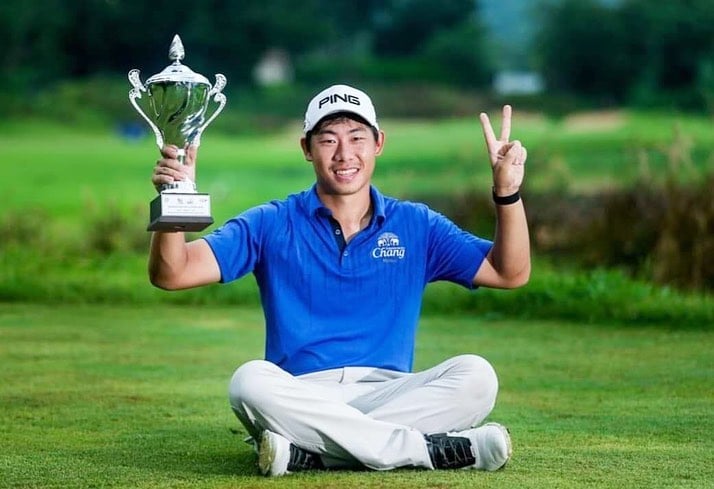 Soon after that, Pavit Tangkamolprasert of Thailand won the Singha-SAT Prachinburi Championship, also on the Thai PGA Tour. The two-time Asian Tour champion had earlier claimed an unprecedented seventh title on the Asian Development Tour at the Boonchu Ruangkit Championship in January.

A week later, another Thai star Prom Meesawat won the Singha Pattaya Open for a record fourth time on the All Thailand Golf Tour. Prom aced the 17th hole en route to a closing 63 and a five-shot victory at the Burapha Golf & Resport in Chon Buri.

Another record was set in Korea later that month when Taehee Lee became the first player to successfully defend his title in the 39-year history of the GS Caltex Maekyung Open. He had closed with a second straight three-under-par 67 to win by one shot at the Elysian Gangchon Country Club.

Lee, who claimed his Asian Tour breakthrough at the Maekyung Open in May 2019, returned to a new venue for his title defence and successfully retained the trophy with a winning total of 11-under-par 199 in the 54-hole event for his fourth title on his domestic Tour. 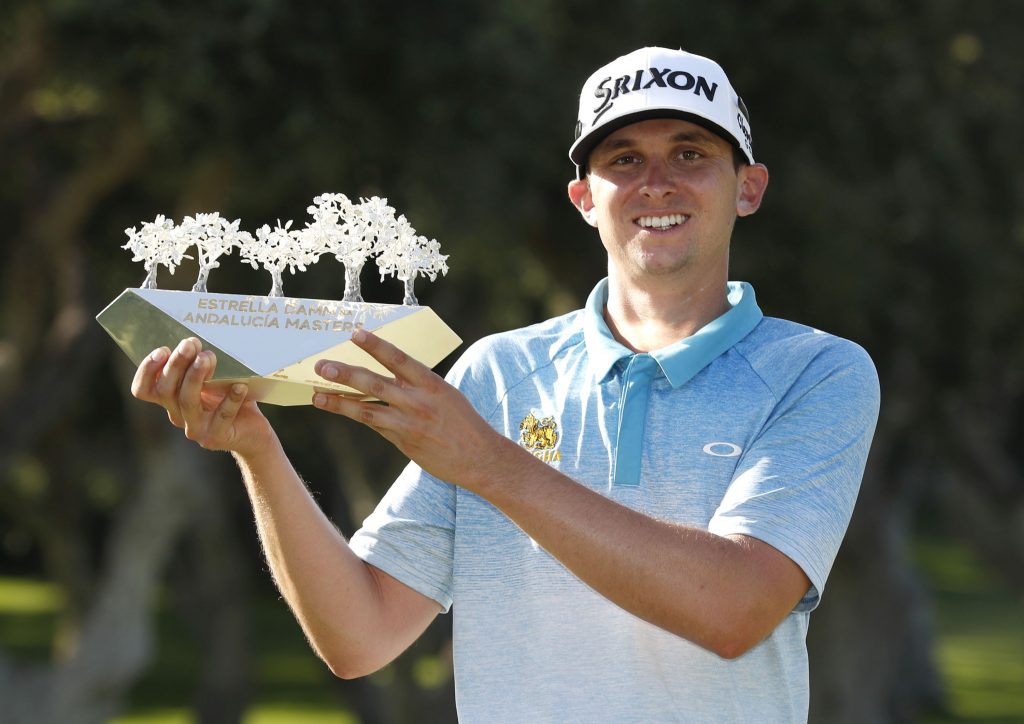 John Catlin of the United States

In September, American John Catlin became the talk of the town when he won twice in the space of three weeks on the European Tour – first at the Estrella Damm N.A. Andalucia Masters in Spain and then the Dubai Duty Free Irish Open.

Catlin, a four-time winner on the Asian Tour, propelled to a career-high 84th place on the OWGR following his victory in Ireland and would eventually end the year in 99th place, sitting inside top-100 for the first time since turning professional in 2013.

Also in September, Thailand’s Suradit Yongcharoenchai outlasted countryman Panuphol Pittayarat to win the Singha-SAT Kanchanaburi Championship on the Thai PGA Tour after a dramatic seven-hole playoff at the Blue Sapphire Golf and Resort.

And Japan’s Rikuya Hoshino, who enjoyed a top-five finish at the Bandar Malaysia Open in March, won the JGTO Fujisankei Classic for the second time in his career and broke into world’s top 100 following his win.

The week after, Joohyung Kim made his regular PGA Tour debut at the Safeway Open and came in tied-67th and Hanbyeol Kim capped back-to-back victories on the Korean PGA Tour after winning the prestigious Shinhan Donghae Open.

Big-hitter Wang Wei hsuan became the youngest Taiwanese to win the storied Mercuries Taiwan Masters. The 22-year-old won by three shots in the long-running event which was sanctioned solely by the Taiwan PGA this year due to the pandemic.

Ratchapol Jantavara of Thailand, who narrowly missed out on getting his full Asian Tour card at the Qualifying School earlier this year, capped off an action-packed September by claiming his long-awaited first professional victory in 10 years at Singha All Thailand Masters.

In October, Thailand’s Pawin Ingkhapradit claimed a one-shot victory at the All Thailand Golf Tour’s season-ending Singha Laguna Phuket Open, a popular event which was previously held annually on the Asian Development Tour.

Thailand’s Jazz Janewattananond  enjoyed a dream start to his Masters debut, thanks to an opening three-under-par 69 at the Augusta National Golf Club. Jazz was one over after bogeys on 11 and 12 but stormed home making four birdies on his final six holes. 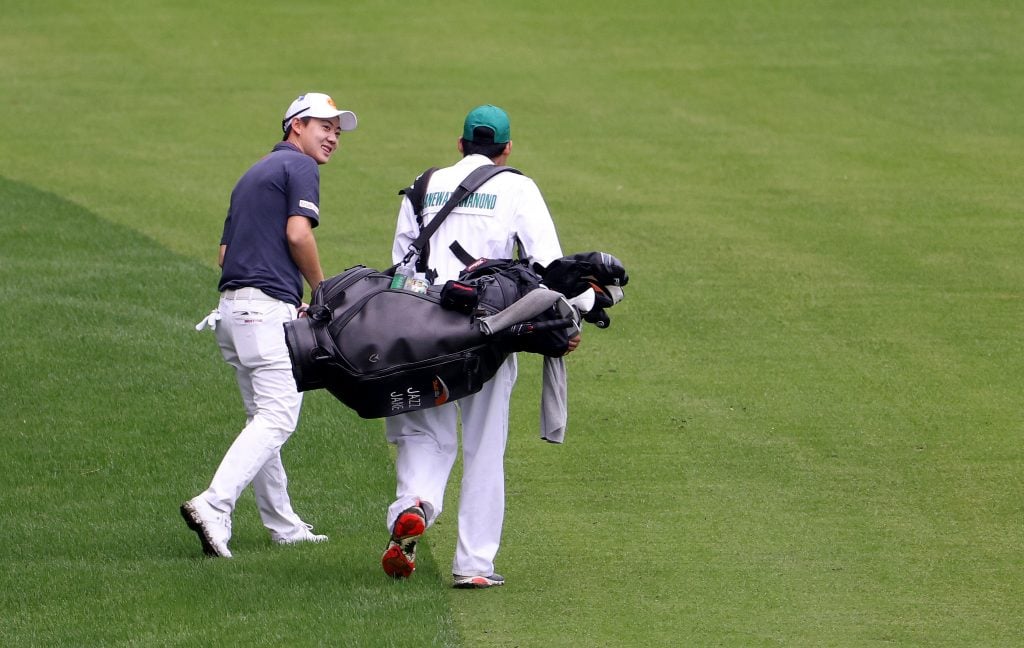 Jazz Janewattananond of Thailand walks with his caddie Pulit Thongtae during a practice round prior to the Masters.

The 2020 Masters Tournament, which was supposed to take place in April as the year’s opening Major, had been rescheduled to November 9th-16th due to the coronavirus pandemic.

Panuphol Pittayarat was another Thai who tasted success in 2020, winning the Singha-SAT Kanchanaburi Classic for his second victory on the Thailand PGA Tour and first since 2013.

This December, we celebrated three more victories of our players in their respective home countries with Hung Chien-yao winning the Taifong Open in Chinese Taipei, Rattanon Wannasrichan regaining his winning form at the Singha-SAT Khon Kaen Championship in Thailand and India’s Gaganjeet Bhullar claiming the TATA Steel Tour Championship for his 10th victory and first in nine years on the PGTI Tour.

It has been an extraordinary year and despite the challenges, it was heartening and inspiring to see a handful of our members continuing to find success on the golfing stage – something which will serve them well when the Asian Tour returns.