Sentosa, June 17: There is something quite ambassadorial about India’s golf star Anirban Lahiri writes Simon Wilson.

Thoughtful, calm and articulate he has been a fine representative for his country while playing on the PGA Tour over the past five years.

It is therefore a significant blow to all and sundry that Lahiri has been, as he says, “marooned” at home in India because of the coronavirus pandemic lockdown and unable to make it back for the re-start of the PGA Tour.

Lahiri played in the Arnold Palmer Invitational in early March and headed back to India to work on his game with long-time coach Vijay Divecha in Ahmedabad before playing in the Hero Indian Open — an event he proudly won in 2015 and put him on course to claiming the Asian Tour Order of Merit title.

But as they say, even the best laid plans sometimes go awry: three days after he arrived, quarantine was introduced for international travellers, before the nation went into lockdown and his national Open was postponed.

“We still don’t have a D-Day for when they will resume international flights,” said Lahiri — who, sadly for Asian viewers, will be missing from the field at this week’s RBC Heritage on the PGA Tour.

The young man, nicknamed “Baan”, was stuck in Ahmedabad for a period, before being able to get to his house in Bangalore with his family.

His golf clubs arrived late because of logistical issues across India but he has finally been able to brandish them over recent weeks at The Eagleton Golf Resort in Bangalore — which was his home club before he moved to the United States.

“I went two months, (actually) about 75 days, before I hit a ball, and that’s probably the longest since I was in 10th grade. It was about the longest break I have ever taken,” said Lahiri, “There were times when you want to tear your hair out as you are used to being on the go all the time.”

Like many across the globe the Indian has used the “time off” to rest and recalibrate and he says: “Spending time with my 16-month-old daughter, has been very precious to me”.

He adds: “It has been quite frustrating but it has also been an opportunity for me to hit the pause button, spend some quality time with my family and friends, do some introspection, work on the mental side and work on the physical side, as much as possible.

“Given the situation there are limitations to what you can do but you try and do the most you can, within the confines of your house. But now that I can play golf again it feels great. I didn’t think that just playing golf can feel this great.”

Lahiri is at the helm of the latest generation of Indian golfers breaking boundaries and inspiring a nation. When he was growing up his idols were Jeev Milkha Singh, who he feels was the “global torch bearer” due to his success all over the world, and Arjun Atwal, whom he calls “the PGA Tour stalwart” — as he remains the only Indian to win on the PGA Tour, thanks to his success in the 2010 Wyndham Championship.

Lahiri triumphed seven-times on the Asian Tour before departing to play on the PGA Tour — where he impressed all by making the FedExCup Playoffs in 2016, 2017 and 2018.

In 2015, he became the first Indian to be selected to play for the International Team in the Presidents Cup and that year he finished tied fifth at the PGA Championship — the best result by an Indian golfer in a Major.

In 2016, he also represented India when golf returned to the Olympics after a hiatus of 112-years and the following year he was again selected for the Presidents Cup. The list of accolades and achievements for a player who turns 33 on June 29 is extremely impressive.

But as all golfers know though form is only temporary, and Lahiri is currently experiencing a dip in fortunes.

He failed to make the FedExCup Playoffs last year for the first time but was able to regain his playing status thanks to finishing strongly at the Korn Ferry Tour Finals. This season, before Covid-19 struck with such devastating effect, he was also facing a similar battle with his form; he was ranked 209th having played 12 events.

“The last 18 months leading up to Covid, have been very, very poor. I have played nowhere near my own expectations, it’s definitely been something I want to work on and fix. That was why I came here to spend some extended time with my coach,” said the Indian.

“We set up a programme to tackle all the issues that we felt were causing my level to drop, and we started working on these things but then lockdown happened. There is a lot of unfinished business and some work to be done for me, I am going to try and make the most of the situation. I need to try and get back to my best golf which has been missing for the past 18 months of so.”

Lahiri feels his iron play has been his “Achilles heel” of late — which, ironically, was for so long one of the hallmarks of his game. With that component of his game not firing as well as it normally does he is not making enough birdies, something that is very costly on the world’s elite circuit.

He says: “I’m caught in the situation now where in a way it’s not terrible that I can’t get back because I have work to do.”

Few doubt that he will recapture the magic that has seen him achieve so much success in the game.

After a brilliant amateur career — he played for his country in the Asian Games (he and Gaganjeet Bhullar were part of the team that claimed silver in Doha in 2006) Eisenhower Trophy, and Nomura Cup — he turned professional in 2007 and it wasn’t long before he triumphed on India’s burgeoning professional tour, winning twice in 2009.

In 2011, he claimed his maiden victory on the Asian Tour at the Panasonic Open on home soil, marking the start of an assault on some of the biggest titles in the region.
Third on the Asian Tour Order of Merit in 2013, second in 2014, he topped the chart the following year thanks to two career-defining victories in February, first the Malaysian Open and then the Indian Open — both events jointly sanctioned with the European Tour.

“Oh, I miss the Asian Tour, I have a lot of friends there. There is no other Tour like the Asian Tour in terms of the camaraderie and the friendships you make, and the experiences you have. It is unique, people in Asia are unique and it’s just a pleasure to enjoy your time on the Tour,” said Lahiri.

“It’s a great stepping stone, you compete against some really good players, play in different conditions, you learn a lot of new things, you experience so many different cultures, different ways of life, it teaches you a lot of things, outside of golf as well. In Europe and the US you play in a similar environment. I really, really enjoyed my time on the Asian Tour.

“It really helped me to become who I am and I made some very deep and lasting friendships. I still look forward to coming back and playing every opportunity I can.” 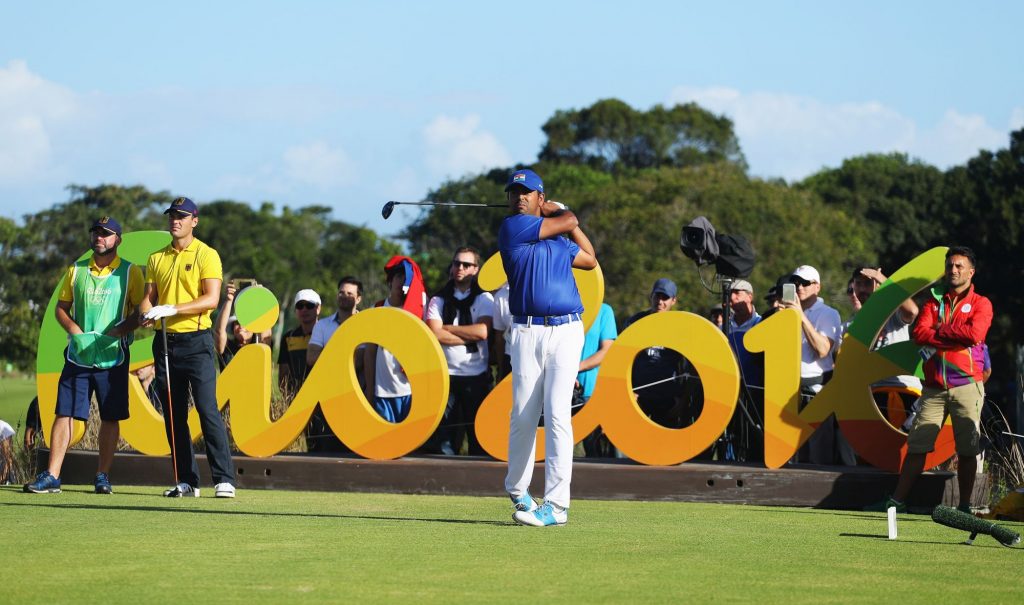 RIO DE JANEIRO, BRAZIL – AUGUST 12: Anirban Lahiri of India watches his tee shot on the 16th hole during the second round of the golf on Day 7 of the Rio 2016 Olympic Games at the Olympic Golf Course on August 12, 2016 in Rio de Janeiro, Brazil. (Photo by Scott Halleran/Getty Images)

For the moment Lahiri is focused on returning to form on the PGA Tour; something which will allow him to achieve his goals of re-establishing his position on the Official World Golf Ranking, playing in all four Majors and helping to further promote the game in India — something that is very important to him.

He has certainly been making the most of this unexpected period of downtime: on Instagram you can find “Cooking with the Lahiris” videos.

“It was just an idea that some of my friends came up with to kill time during lockdown. You have seen guys giving tips, hosting talk shows and a lot of us have been cooking,” explains Lahiri, who has been a vegetarian for two years.

When it comes to cooking, he says he is a “10 handicapper while my wife is a professional”.

With his skills now sharpened in the kitchen, he will also be looking to serve-up some Lahiri signature specials when he returns to the Tour.