Cast your eye down the list of past champions of Singapore’s National Open and one of the winners who stands out – with a truly inspirational story – is Shaun Micheel.

The American triumphed, on this day, in 1998 at SAFRA Resort & Country Club, and, as is well documented, went on to record a remarkable victory in the 2003 PGA Championship – at Oak Hill Country Club in New York. 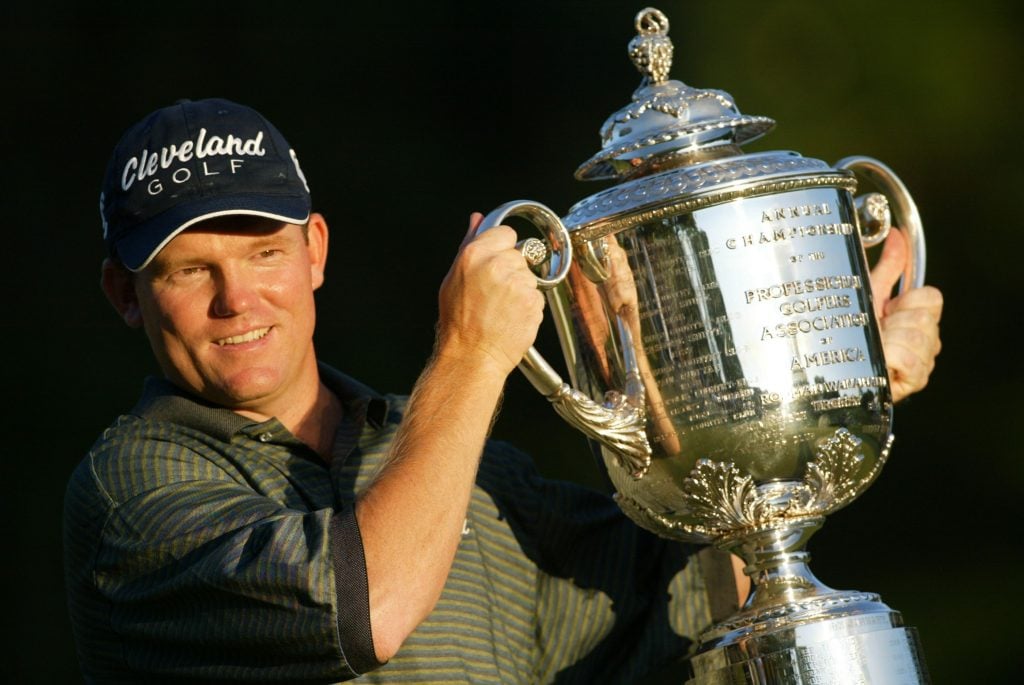 That is two “Major” victories, some would say – particularly if you are a lover of the Singapore Open.

No doubt, the seeds for Micheel’s win in the PGA Championship were sown in Singapore 22 years earlier.

“After I lost my PGA Tour exemption in 1997, my manager, at the time, mentioned going to Asia with Charlie Wi – who he also managed. He felt like a complete change of scenery might help me regain the confidence that I lost after a poor year on the PGA Tour,” said Micheel from his home in Tennessee last week – after having played in the Bridgestone Senior Players Championship on the Champions Tour.

He had started his professional career in 1992 on the Sunshine Tour in South Africa and because of that experience, he felt comfortable going to Malaysia to go through the Asian Tour qualifying process. The Tour at that time was called the Omega Tour.

Having negotiated the rigours of Qualifying School, he was quick to establish himself on Tour.

Early on in 1998, he pushed Thailand’s Chawalit Plaphol and Boonchu Ruangkit all the way in the Orient Masters in China. He eventually finished in a share of third, behind Chawalit – who claimed what was to be the first of many wins on Tour – and the legendary Boonchu, who finished second.

Says Micheel: “The competition was really good and I knew that if I could find some consistency, I would have a chance to get back onto the PGA Tour.”

The game plan worked and the consistency he so desperately wanted started to return; in the lead-up to the Singapore Open he was regularly in contention and on the cusp of a breakthrough win.

“You know, I don’t remember too much about the state of my game going into Singapore. One thing stands out, however, as I prepared to travel to Singapore. The week before I left, I asked my, then, girlfriend to be my wife. At the time I had known Stephanie for 16 years and we had been dating for nearly five years. I suppose that I felt quite encouraged about my engagement and that gave me the extra lift that I needed to win,” says Micheel.

He opened with a five-under-par 67 at SAFRA, to sit in a tie for fourth; and at the halfway mark, following a 69, he was two adrift of the leader, Lu Chien-soon – one of Chinese Taipei’s greatest golfing exports and a two-time winner of the Singapore Open, in 1983 and 1989.

Another 67 by Micheel on the third day saw him move into the lead, alongside South African Hendrik Buhrmann.

And on Sunday a fourth successive sub 70 (he shot 69) saw Micheel finish two ahead of Buhrmann to triumphantly claim his first Tour win and a cheque for US$80,750.

He says: “I believe that I had only two dropped shots the entire week. I don’t recall much of the competition other than my layup on the last hole, tapping in for par and then putting on the “cowboy” hat while accepting the trophy. Afterwards, I found out that a friend of my father’s had watched me win from a hotel in Japan.”

The cowboy hat was Ericsson sponsored headgear and one of many rewards that came with his win.

“The victory in Singapore validated my choice in going overseas when many others questioned my decision. Not a day goes by at home when I don’t see my Singapore Open trophy. No one will know how much that victory energised and inspired me to get back onto the PGA Tour and eventually win the PGA Championship in 2003,” said Micheel, who was 29 years old when he won in Singapore.

He is one of four past champions of the Singapore Open to have won a Major – the other three being: Australian Adam Scott, Angel Cabrera from Argentina and Spaniard Sergio Garcia. 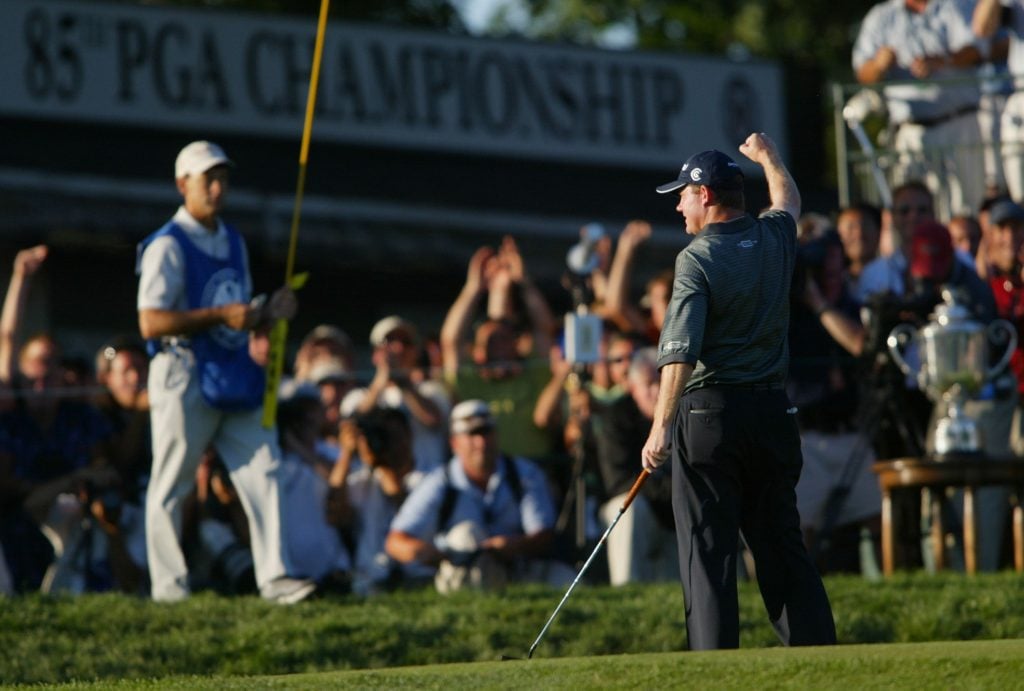 ROCHESTER, NY – AUGUST 17: Shaun Micheel of the USA celebrates his win on the 18th green after the final round of the 85th PGA Championship at Oak Hill Country Club on August 17, 2003 in Rochester, New York. (Photo by Jamie Squire/Getty Images)

Singapore as a country also left a big impression on him, as it did for his father – who was one of the original pilots for FedEx in 1973.

“My late father travelled to Singapore quite a bit and he loved it. So, when I arrived into the country I immediately saw why he felt the way that he did. The cleanliness is what struck me initially! To be honest, I thought it was so cool to be so far away from home in a country that had so much to offer in such a small space. From the hotels to the restaurants to the natural beauty, I was enamoured with Singapore. Of course, I’ll never forget SAFRA Resort. Great memories and I would love to bring my wife over some day.”

In fact, his first year in Asia in 1998 proved to be an enormous success not just because of his victory in the Lion City.

“I absolutely loved my time in Asia. Many of the places where I competed were just faraway lands that I had read or heard about from my father who was a frequent visitor. Having a place to play was, at the time, the most important element as that was why I was there in the first place. Over time, however, I realised that it was not all about playing golf. Life in the United States was quite a bit different than many of the cities that I visited.

“Having an open mind was a bit of advice that I received and I did my best to fall in love with the new cultures, people and differences that existed. One thing that I did was to learn to a few simple words in the local language in an attempt to show respect to my new friends. Of course there was no way to become fluent in a new language overnight but I felt like it was important for me to try to fit in the best that I could. I did receive quite a bit of help from Charlie Wi and that was greatly appreciated.”

Micheel is also quick to point out the great support he received from the Tour.

He said: “In the end, my incredible experience came as the result of the incredible staff from the Asian Tour office, the players that I met and the many people who accepted me and allowed me to enjoy something new!”

After his win in Singapore he made it on to Nike Tour (now the Korn Ferry Tour) and won the NIKE Greensboro Open in 1999. And the following year he returned to the PGA Tour, so any chance of returning to play in Asia proved too difficult. 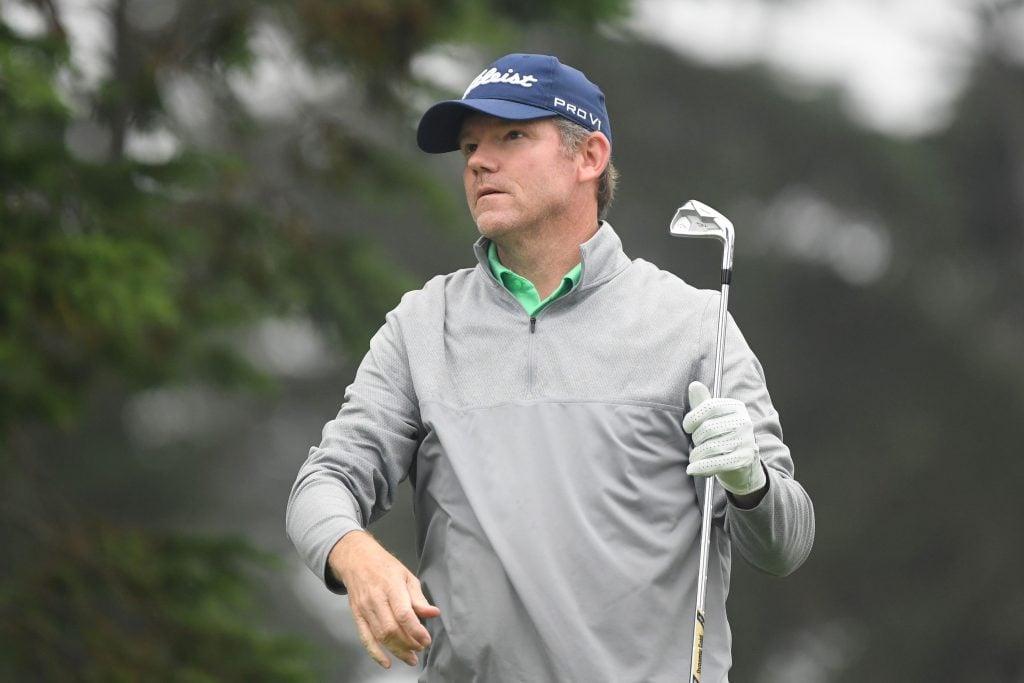 SAN FRANCISCO, CALIFORNIA – AUGUST 06: Shaun Micheel of the United States watches his tee shot on the third hole during the first round of the 2020 PGA Championship at TPC Harding Park on August 06, 2020 in San Francisco, California. (Photo by Harry How/Getty Images)

Now at 51 years old, he has been competing on the Champions Tour and the European Senior Tour, which he says: “allows me to keep my passport dust free and my experiences fresh.”

He adds: “Many journalists labelled me a journeyman pro like it was a negative. My experiences of competing in over 34 countries is a badge of honour that I share with all who will listen.

“I would never trade my time in Asia for anything. So many of my friendships began in Asia. Thinking of Darren Clarke, Lee Westwood, KJ Choi, Jeev Milkha Singh, John Senden and Thongchai Jaidee. I love catching up with these guys and reliving the old days. Maybe one day I can return!”