San Francisco, United States, August 10: American golfing phenomenon Collin Morikawa shook the foundations of the golfing world today by winning the US PGA Championship in only his second start in a Major and barely a year after turning professional.

Helped by a breathtaking eagle on the par-four 16th hole, he shot a bogey-free six-under-par 64 to finish on 13 under and a two stroke victory over Paul Casey from England and American Dustin Johnson.

Casey returned a 66 for his best finish in a Major while Johnson, who started the day with a one shot advantage, returned a 68 – at TPC Harding Park in San Francisco. 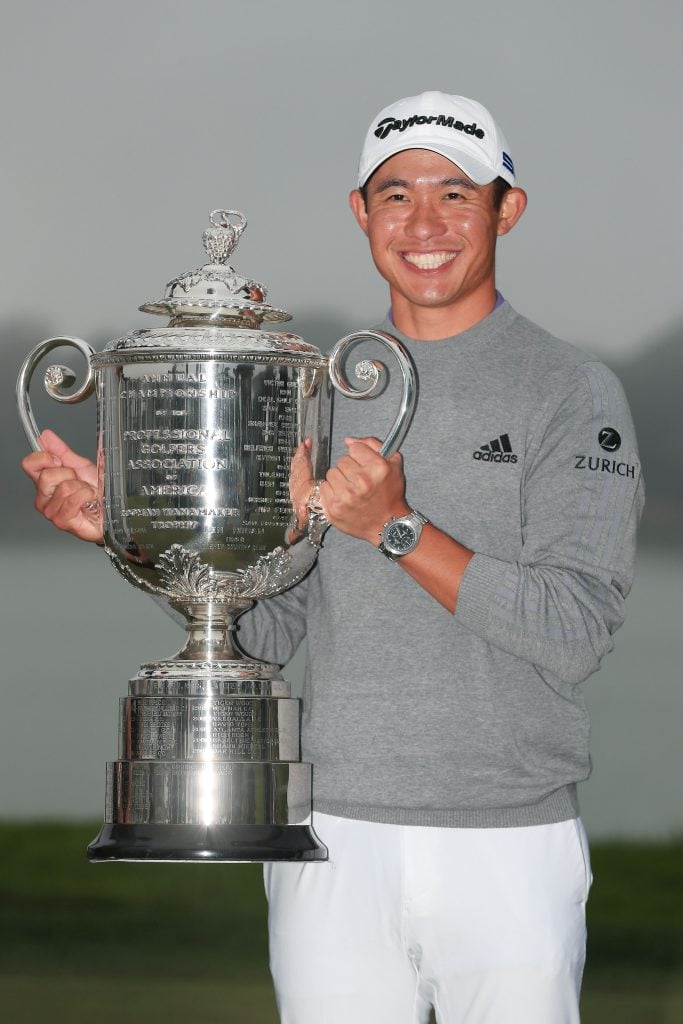 SAN FRANCISCO, CALIFORNIA – AUGUST 09: Collin Morikawa of the United States celebrates with the Wanamaker Trophy after winning during the final round of the 2020 PGA Championship at TPC Harding Park on August 09, 2020 in San Francisco, California. (Photo by Tom Pennington/Getty Images)

Morikawa started the final round conservatively making the turn in two-under with birdies on three and four. But he stormed into the lead on the back nine with a birdie on 10, a chip in birdie on 14 and an eagle on 16, where he hit his driver to 15 feet – a moment of genius that proved to be the turning point of the Championship.

“I was hoping for a really good bounce and got it,” he said of his tee shot on 16. “I hit a really good putt, and now we’re here.”

The 23-year-old, who is half Japanese, became the third youngest US PGA Championship winner since 1946 – only behind American Jack Nicklaus (1963) and Northern Ireland’s Rory McIlroy (2012).

Last year he won the Barracuda Championship in only his eighth start on the PGA Tour and this year, after the Tour resumed following the long lay-off caused by the coronavirus pandemic, he defeated compatriot Justin Thomas from the United States in a playoff to win the Workday Charity Open. Just prior to that he lost to American Daniel Berger in a playoff at the Charles Schwab Challenge.

China’s Li Haotong, the second round leader, carded a 69 to tie for 17th while American Kurt Kitayama, a winner on the Asian Tour, came in with a 70 to finish equal 58th.

Brooks Koepka from the United States, bidding to win for the third successive year, signed for a disappointing 74 to fall back into a tie for 29th.

American star Tiger Woods, the winner of 15 Majors and four PGA Championships, fired his best round of the week, a 67, to finish joint 37th.