Few players have dominated one of Asia’s national Opens like Australian Adam Scott has with the Singapore Open.

He has lifted the trophy on three occasions in 2005, 2006 and 2010 – an impressive haul, surpassed only by Jumbo Ozaki’s five Japan Open victories and the four wins by Spaniard Miguel Angel Jimenez at the Hong Kong Open. Tommy Nakajima also won the Japan Open four times.

Scott has claimed the Singapore Open more times than anyone and his success was in synergy with the emergence of the prestigious event on The Serapong course at Sentosa Golf Club.

The tournament was not played from 2002 to 2004 before being relaunched in 2005 at Sentosa – where it has, so memorably, been played since.

So, Scott’s win in 2005 was the start of an exciting new chapter for the event while it was on this day 14 years ago that he successfully retained the tournament.

And what an exceptional win that was on an unprecedented Sunday.

The Australian, 26 years old at the time, beat South African Ernie Els by two shots in a three-hole play-off in the US$3 million event.

He delivered the knock-out blow with a birdie at the par-five 18th to edge Els, after both players parred the first two holes – the 16th and 17th.

It was the 11th professional victory, but his first in 2006.

He coolly dropped in a five-foot putt while Els three-putted for bogey.

The rather unusual play-off format was the result of the fourth round being cancelled late on Sunday afternoon following two weather suspensions.

Organisers decided to reduce the event to 54-holes based on the scores after Saturday’s third round.

Hence, with Scott and Els tied on eight-under-par 205 after the third day the option was taken to complete the tournament with a three-hole play-off – much to the delight of the thousands of fans who had patiently remained on site waiting for a resumption.

“It’s the first time I have defended a title and it’s a great feeling and something that I will cherish. Like I said last year, it’s a great feeling to win a national Open and I’m really thrilled. It’s been a long time coming this win, since last year and hopefully I can keep going from here,” said Scott, who won US$475,500.

The fans were treated to a thrilling duel between the top two stars who matched each other blow for blow in the final round and the play-off. Els missed a birdie chance from 10 feet on the first extra hole on 16 while Scott saved par from five feet.

After both parred the 17th, Scott, the then world number six, gained the advantage on the 18th after an exquisite chip which left him five feet from the pin while Els struggled after a wayward drive put him in the shin-high rough. After finding the front of the green with his third, the South African agonizingly three putted from 25-feet.

“There wasn’t much separating Ernie and myself and whether that was over 72 or 54, or 65 holes which we played, it came down to a play-off and fortunately I won. I definitely feel I’m the winner of the tournament,” said Scott. 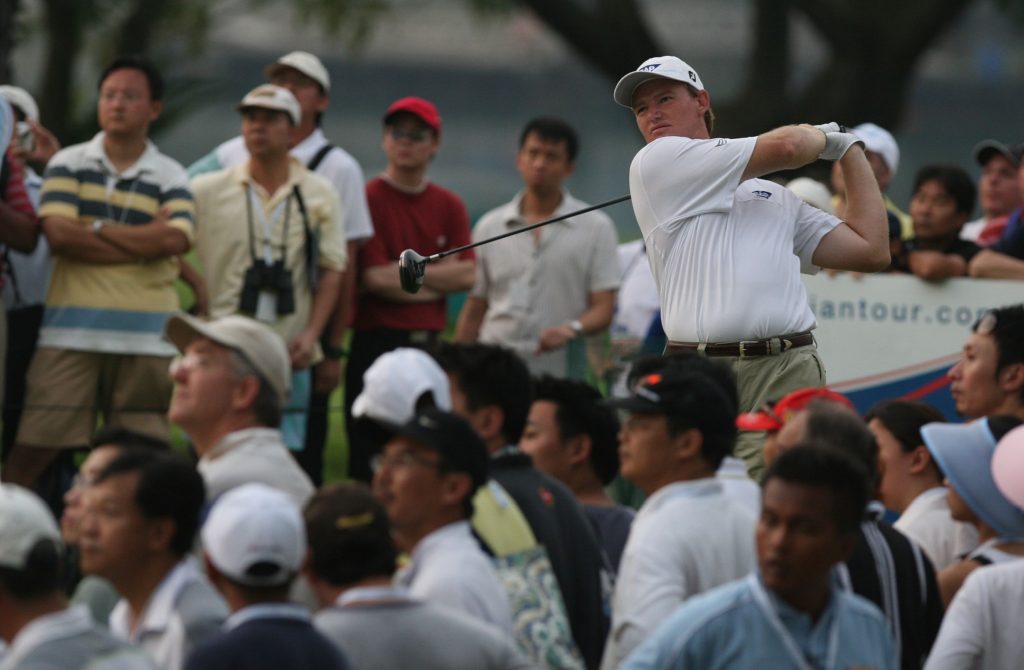 Els was naturally disappointed with the outcome. He said: “In the play off, I had my chances. I hit a good shot in to the 16th (to 10 feet) but did not hit the putt well. On 17 for some reason my tee shot came back – I was close to the hole but could not putt it.

“On the 18th I drove it right – just one of those things. On the third shot I was a club short, it was coming nicely on line but unfortunately it was not enough club. It is disappointing,” added the South African.

Australian Brad Kennedy took third place with his three-round total of 208 while China’s Liang Wen-chong settled for fourth position on 209.

The tournament had started with Filipino rookie Juvic Pagunsan and Scott Strange of Australia sharing the first round lead shooting four-under-par 67s.

However, on day two Els made his move surging up the leader board firing an imperious 65 – a course record at the time – to take a share of the lead with Strange.

Titleholder Scott then set up a mouth-watering showdown with Els after a 66 on Saturday. Els needed an injection to treat a bout of food poisoning during a two-hour weather disruption but he battled on gamely to finish the day tied at the top.

As expected the final round was a tight affair but a one hour and 40 minute delay in the morning due to lightning, and another torrential thunderstorm late in the afternoon, meant they could only complete eight holes before the fourth day was abandoned and the crowds eagerly gathered to watch the play off.

The tight finish was in stark contrast to Scott’s victory the year before when he sauntered to a seven stroke win over England’s Lee Westwood – that result happened this Friday, a mere 15 years ago.