David Lipsky, the Asian Tour Order of Merit champion in 2014, hit the headlines very recently by winning the TPC San Antonio Challenge on the Korn Ferry Tour in July.

Interestingly, the American went to La Canada High School in Los Angeles – where his countryman Collin Morikawa, currently the hottest player in the game, also attended.

And Lipsky’s Korn Ferry Tour win, which was his first, came less than one hour after Morikawa earned his second success on the PGA TOUR at the Workday Charity Open.

It is evidence of the calibre of Lipsky – who also attended the prestigious Northwestern University in Chicago, where, amongst other, England’s Luke Donald enjoyed an outstanding college career.

To date, Lipsky has also claimed two titles both on the Asian Tour and on the European Tour.

And there is no doubt the biggest victory of his career so far came on this day six years ago in the Swiss Alps. 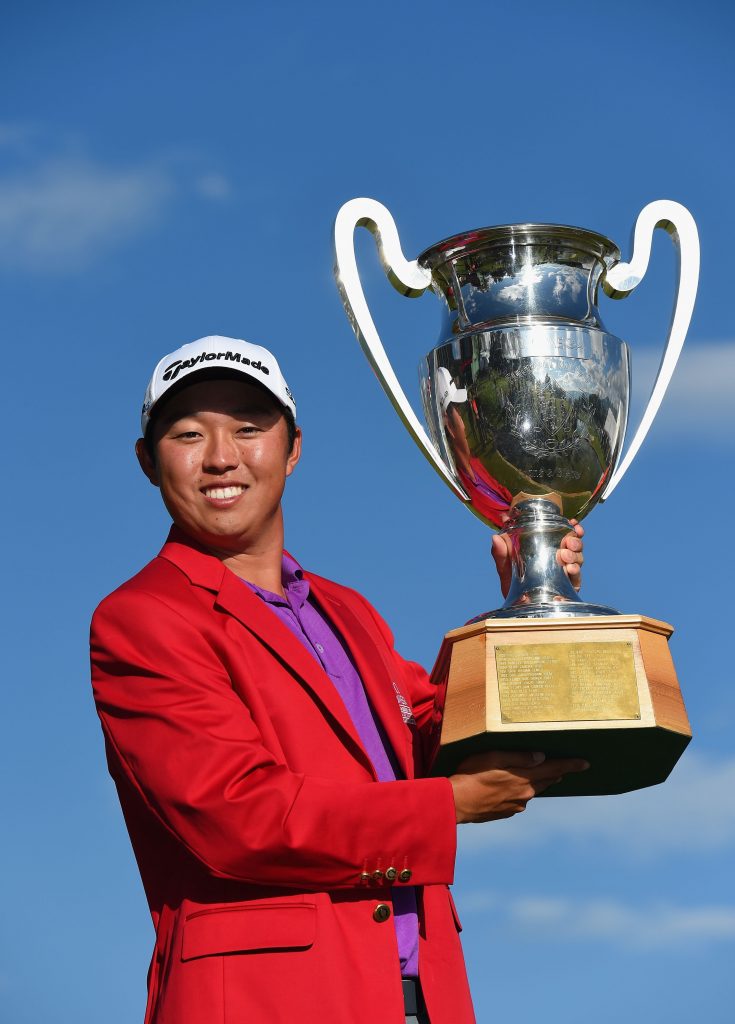 CRANS-MONTANA, SWITZERLAND – SEPTEMBER 07: David Lipsky of USA holds the winners trophy after winning in a playoff against Graeme Storm of England during the final round of the Omega European Masters at Crans-sur-Sierre Golf Club on September 7, 2014 in Crans-Montana, Switzerland. (Photo by Stuart Franklin/Getty Images)

In what was only his 18th start on the European Tour, he defeated Englishman Graeme Storm on the first hole of a sudden-death play at the Omega European Masters at Crans-sur-Sierre – an event steeped in history, with its origins dating back to the early 1920s when it was the Swiss Open.

Lipsky was 26 years old at the time and had only been a professional for three years but showed maturity beyond his years in the way he played the play-off hole.

He had started the final round two shots behind overnight leader Storm but, playing in the penultimate group, he charged through with a five-under-par 65 to set the clubhouse lead on 18 under.

That was helped by a birdie on the par-four 18th – where he hit his approach to within inches of the cup – and meant Storm needed a par there to force the tournament into overtime.

The Englishman duly made four meaning he and Lipsky finished one shot ahead of none other than emerging American star Brooks Koepka, who was tied for the lead until a bogey on the 17th, where his wayward approach plugged in a greenside bunker.

When they returned to 18 for the play-off, Lipsky played the hole very differently after his opponent hit a poor tee shot that missed the fairway and came to rest against a wall.

Storm had no option but to chip out on to the fairway.

Lipsky, who had just 86 yards to the hole from a bunker with his second shot, took no risks and laid up short of the green.

It proved to be the right decision as after he chipped close to the pin, Storm made a five, and he was left with a simple putt for victory. 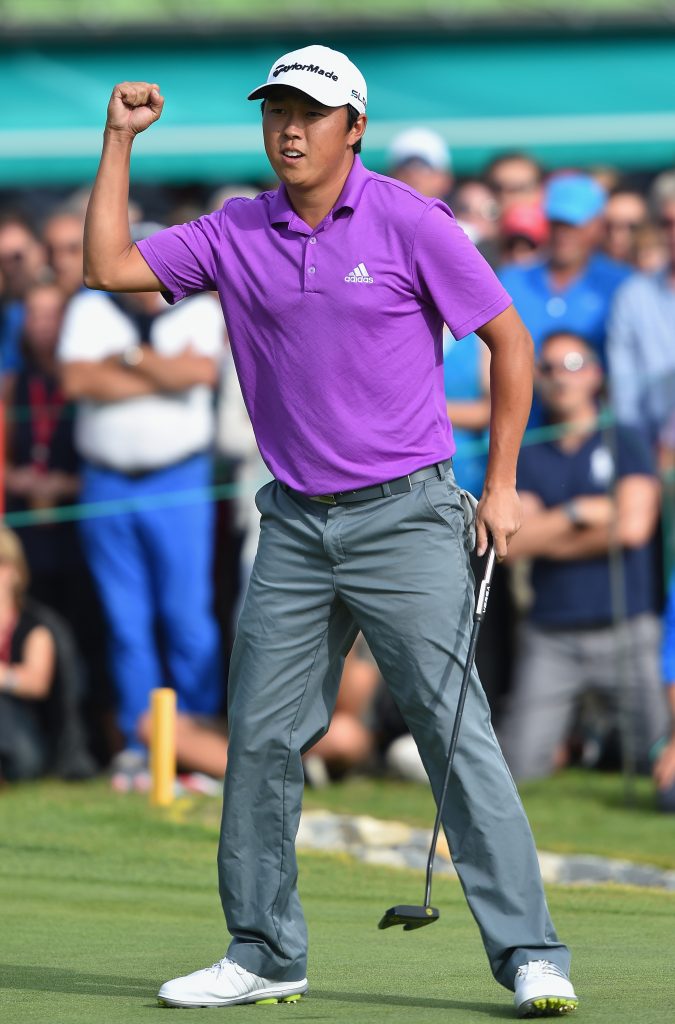 CRANS-MONTANA, SWITZERLAND – SEPTEMBER 07: David Lipsky of USA celebrates winning in a playoff against Graeme Storm of England during the final round of the Omega European Masters at Crans-sur-Sierre Golf Club on September 7, 2014 in Crans-Montana, Switzerland. (Photo by Stuart Franklin/Getty Images)

Speaking about the play-off hole, Lipsky said: “It’s a tough tee shot anyway, but when there’s the title on the line it’s very tough.

“You have to draw your tee shot from right to left to hold it against the hill, and I thought I’d hit a great shot but it ended up going in the bunker.

“It was a tough shot out of the bunker and, with Graeme only going to make par at best, I decided not to risk going in the water. In the end it was the right play, and I’m so pleased to get the job done.”

Storm reflected: “It’s tough to take right now. I didn’t have much time between finishing my final round and starting the play-off, so I probably wasn’t as composed as I should’ve been.

“So it was obviously disappointing, but overall it’s been an unbelievable week. There is a lot of emotions flying round right now so I’ll have to reflect with a clear head in the morning, but there are definitely lots of positives to take from the week.”

Lipsky earned €383,330 for his triumph, putting the wheels in motion for claiming the Asian Tour Order of Merit title later in the year. 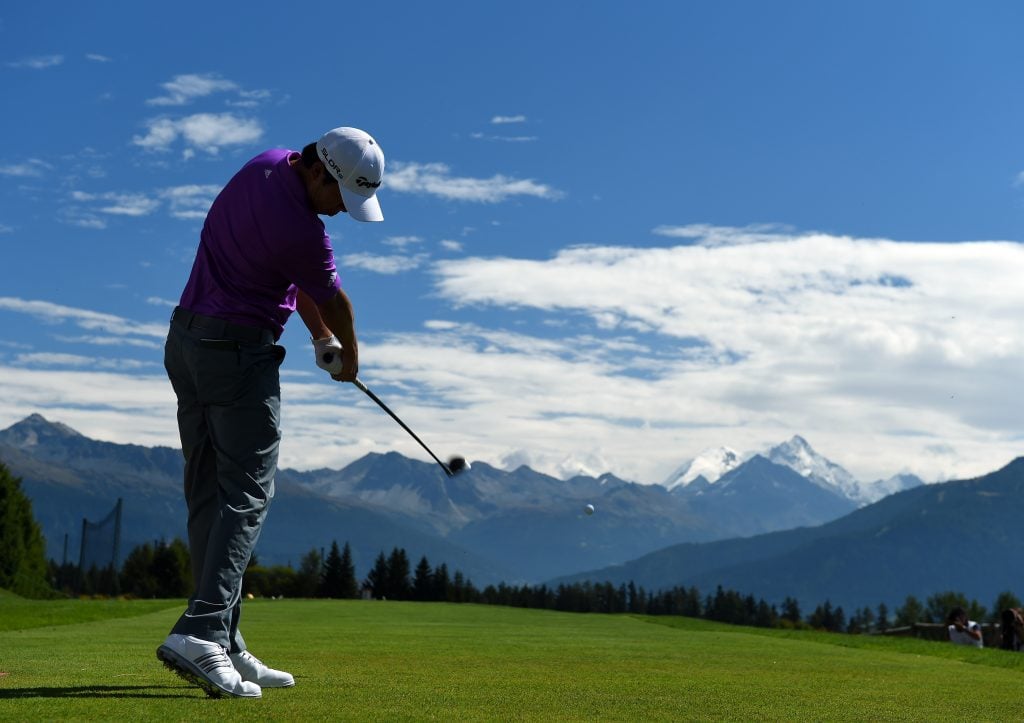 CRANS-MONTANA, SWITZERLAND – SEPTEMBER 07: David Lipsky of USA plays a shot during the final round of the Omega European Masters at Crans-sur-Sierre Golf Club on September 7, 2014 in Crans-Montana, Switzerland. (Photo by Stuart Franklin/Getty Images)

He became the first Asian Tour member to win the Omega European Masters since this event became part of the Tour in 2008.

And he was the first American to win the Omega European Masters since Craig Stadler in 1985.

Lipsky’s journey on the Asian Tour began when he won the Qualifying School in January of 2012. And, he was victorious in the Handa Faldo Cambodian Classic just two months later before a sensational 2014 thrust him into the international spotlight.

Two years ago he also claimed the Alfred Dunhill Championship in South Africa for his second win on the European Tour.

With European, Asian and Korn Ferry Tour wins to his name, he is building a mightily impressive portfolio of tournament wins across the globe.

But producing a more impressive victory than the Omega European Masters will take some doing.