At last weekend’s PGA Championship, there was a real possibility that a player from Asia would lift the famous Wanamaker Trophy.

The huge audience of golfers, and non-golfers, watching west of the Pacific tuned in to see if China’s Li Haotong could prevail after leading at the halfway mark.

Sadly, his challenge failed to materialize over the weekend while Asia had some consolation in the fact that the winner, America’s shining new-star Collin Morikawa, is half Japanese.

And so the quest by Asia to produce a winner of a Major to match Korean Y.E. Yang’s legendary victory in the 2009 PGA Championship continues.

That memorable win was, in fact, achieved 11 years ago on this day. 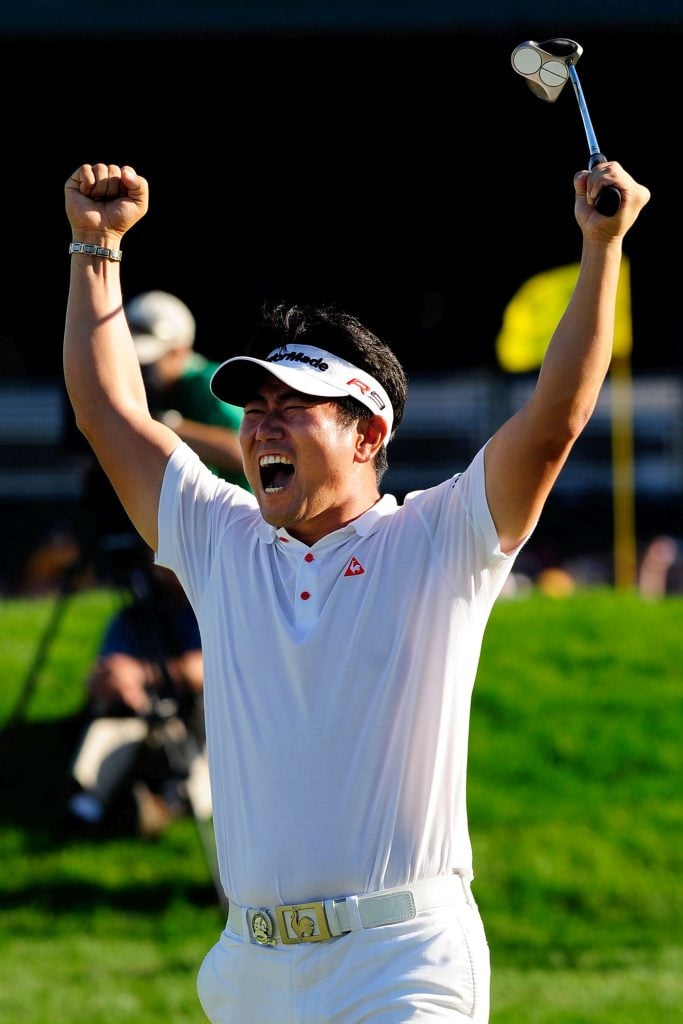 CHASKA, MN – AUGUST 16: Y.E. Yang of South Korea celebrates his birdie putt on the 18th green during the final round of the 91st PGA Championship at Hazeltine National Golf Club on August 16, 2009 in Chaska, Minnesota. (Photo by Sam Greenwood/Getty Images)

In what is another significant moment in time that feels like only yesterday, Yang became the first Asian-born player to win a Major.

He surpassed the previous best performances by Asians in Majors, which were runner-up finishes by Chinese Taipei’s  Lu Liang-huan in the 1971 Open Championship; Isao Aoki, from Japan, in the 1980 U.S. Open; and Chinese Taipei’s Chen Tze-chung in the 1985 U.S. Open.

Li also came close in 2017 when he claimed third place in The Open while Korean K.J. Choi was third in the 2004 Masters – and fourth in the same event six years later.

The 91st PGA Championship was played at Hazeltine National Golf Club and Yang’s victory was one of the biggest upsets of the century and had a seismic impact on the game of golf because not only did he break Asia’s duck at Majors but he also defeated American superstar and world number one Tiger Woods.

Woods had already won 14 Majors – at that time, it would have been inconceivable to think his next one would be the Masters in 2019 – and he had never lost any tournament on American soil when leading by more than one shot. 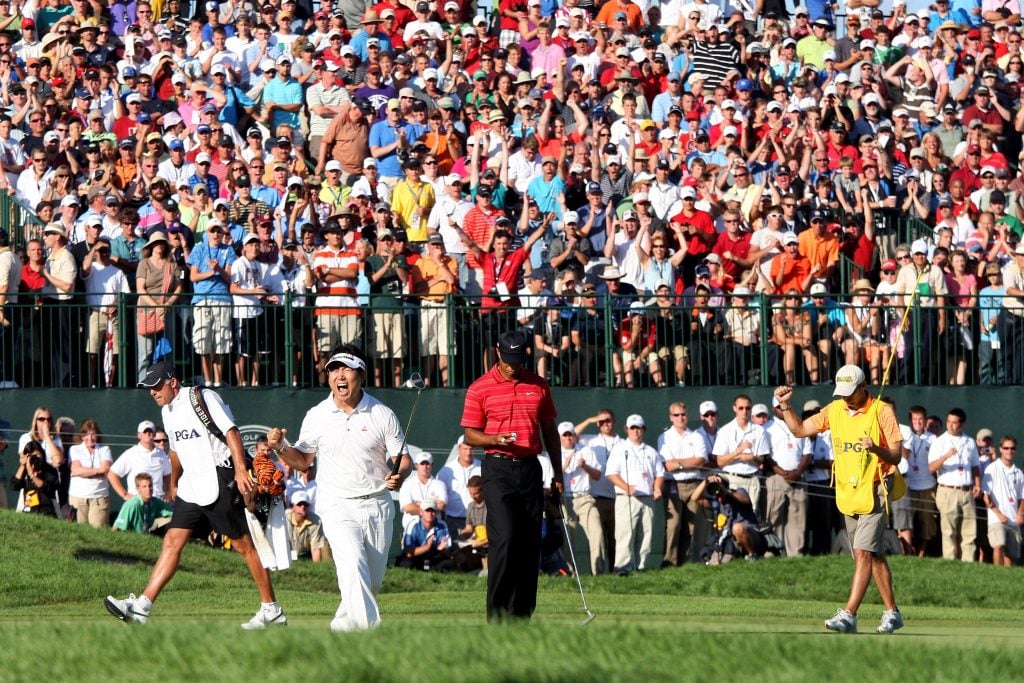 Yang, a 37-year-old who attended the PGA Tour qualifying school nine months before, was ranked 110 in the world and was barely known State side.

But that was the beauty of his moment of glory, as it was a victory sealed by stealth.

Unknown and unheralded in America, he arrived at Hazeltine already a prolific winner in Asia having claimed four titles in Japan and two on the Asian Tour.

He had also fired a warning shot early on in 2009 by winning the Honda Classic in March – becoming only the second player from the Land of Morning Calm to win on the PGA Tour. Choi was the first in 2002.

A fine victory it was but it did little to alert experts in the game about what was to happen five months later in the final Major of the year.

And as expected, Woods was dominant over the first three days at Hazeltine and appeared on course to collect his fifth PGA Championship.

He was the central character in a golden era for the game thanks to his divine brilliance.

Yang had started poorly with a one-over-par 73 but gained some confidence the next day by firing a 70 to move into the top-10 – trailing Woods by six. 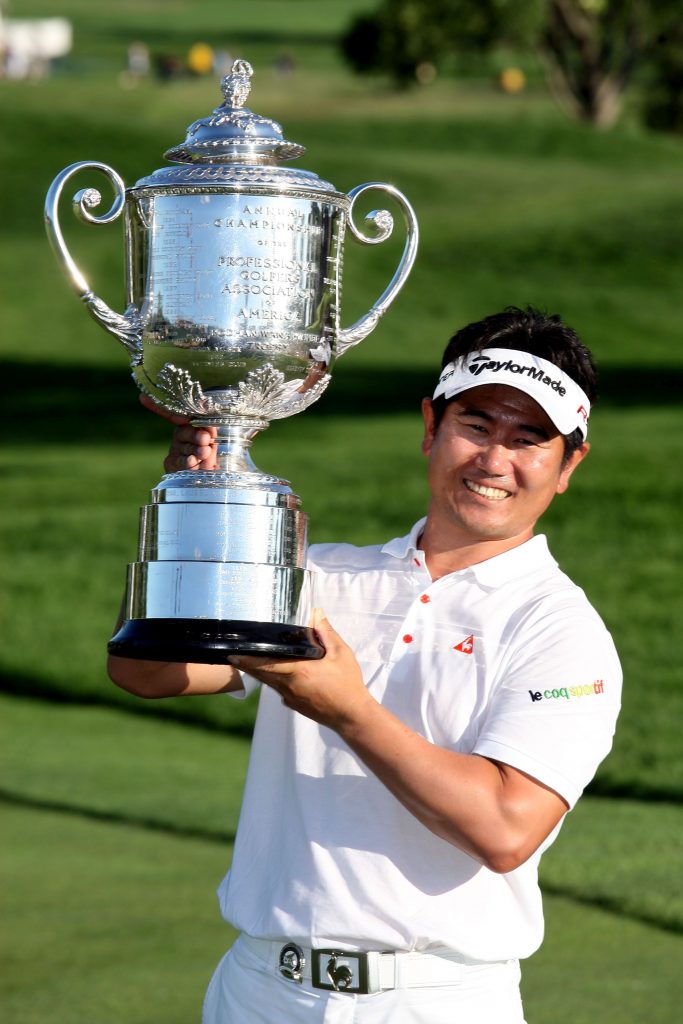 But Yang used all of his powerful well built-frame – matched only by his illustrious countryman Choi – to move into contention on day three. He fired a 67 to sit two back of Woods in joint second with Ireland’s Padraig Harrington – the defending champion and already a three-time Major winner.

The Korean was in exalted company – but this was a Major – and the occasion became even more sublime when he was paired with Woods on the final day.

On the front nine, Woods was out of sorts and three-putted for bogey at number four and made bogey from the bunker on eight to make the turn in two over. That meant Yang drew level.

They were still tied with five holes to play when Yang delivered a knockout blow, much in the same way that Morikawa did when he made eagle on the par-four 16th at TPC Harding last Sunday.

Woods had appeared to have the upper hand and was in birdie range at the par-four 14th, but Yang sensationally countered by chipping in from 60 feet for eagle to take the lead by one.

And he had maintained that slim advantage by the time they reached the par-four 18th, where Yang was called upon again to conjure one final bit of magic.

For his second shot, a tree slightly blocked his view of the flag and with Woods in the fairway, Yang needed to hit the shot of his life.

He duly accepted the challenge, and with his three-iron hybrid he cleared a bunker and saw his ball come to rest 12 feet away, where he made birdie to seal a history-making victory.

He closed with a 70 for a three-stroke victory over Woods, who shot a final-round 75 after missing a short par putt on the last for his worst score ever in the final round of a Major when he was in the last group.

“It’s not like you’re in an octagon where you’re fighting against Tiger and he’s going to bite you, or swing at you with his nine-iron,” said Yang, after through an interpreter. “The worst that I could do was just lose to Tiger. So I really had nothing much at stake.”

“This might be my last win as a golfer,” added Yang. “But it sure is a great day.”

“All the other 14 major championships I’ve won, I’ve putted well for the entire week,” Woods said. “And today, that didn’t happen.”

“He [Yang] went out there and executed his game plan. He was doing exactly what you have to do, especially in these conditions. I think he played beautifully.”

Yang finished on eight-under 280 and won US$1.35 million, along with a five-year exemption on the PGA Tour and the Majors. 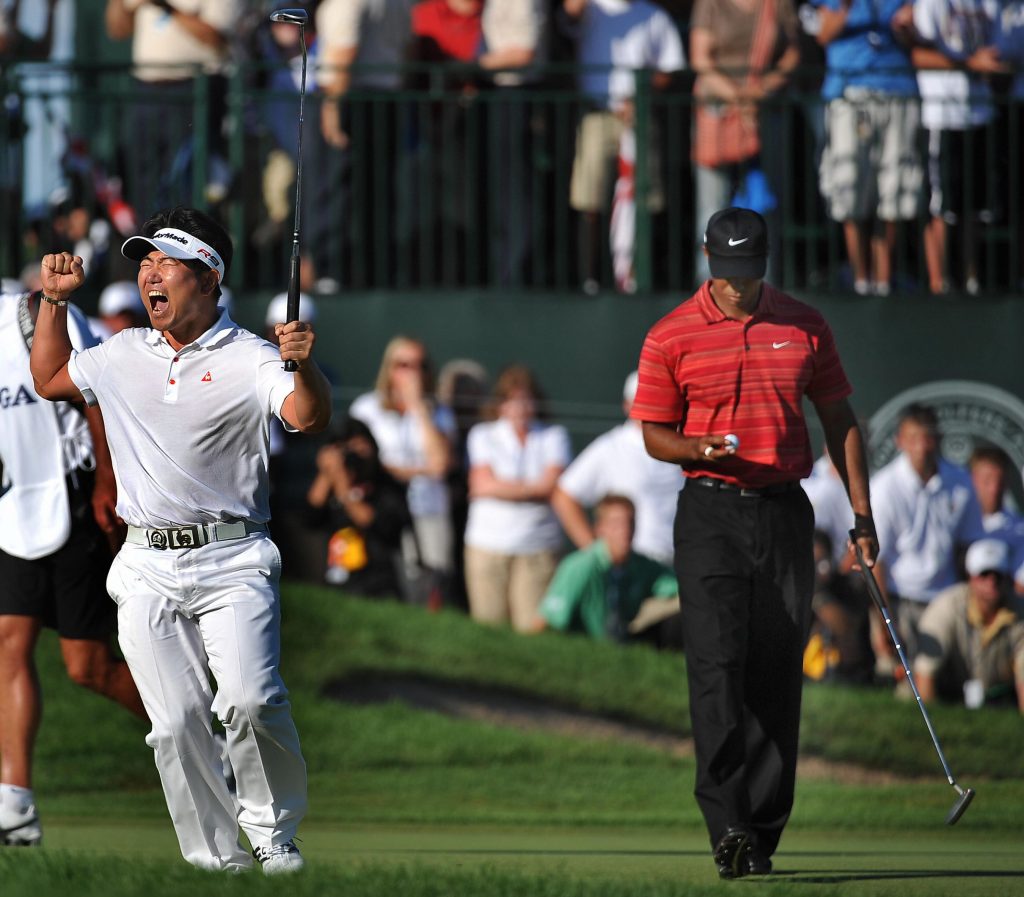 Y.E. Yang of South Korea after sinking his putt to win August 16 ,2009 at the 91st PGA Championship at the Hazeltine National Golf Club in Chaska, Minnesota. At right is Tiger Woods of the US . AFP PHOTO / ROBYN BECK (Photo credit should read ROBYN BECK/AFP via Getty Images)

Even Korea’s president, Lee Myung-bak, got up before sunrise to watch the tournament live. He later phoned Yang to offer his congratulations.

“I woke up at dawn today to watch the broadcast, and you played in a calm manner,” Lee told Yang, according to Lee’s office. “First of all, you enhanced our people’s morale by winning the Major title for the first time as an Asian.”

It was indeed a triumph of great magnitude on a day when Yang rode into Mayor City, made a Major name for himself and Majored in the game of life.