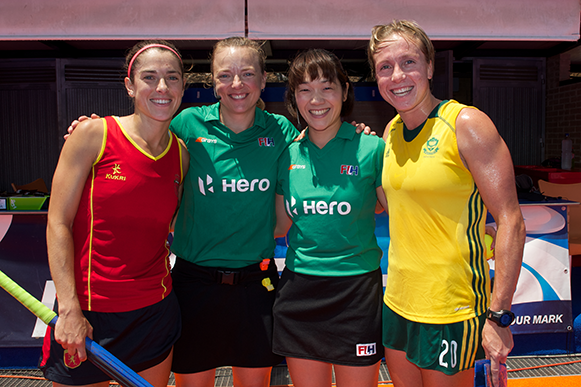 Amy’s advice to umpires: soak it all in

When it comes to memories of Olympic Games, we all think of athletes and coaches. What was it like to step on the pitch for the first time? How did you feel as the national anthem played? These are questions that athletes answer time and again.

We can tend to forget that there is another group of people whose performances at the Olympics are vital to the result: the third team, otherwise known as the umpires and officials.

Just as a player will remember the winning goal they scored or the crucial tackle they made, so too the match umpire will have memories of their own performance. There will be moments when they held their whistle for the perfect advantage decision or the knowledge that their brave decision led to the right outcome.

Amy Baxter was umpire at both London 2012 and Rio 2016. On both occasions it was the reaction of the supporters that stands out most for the USA umpire.

“For London 2012, my standout memory was doing one of Great Britain’s matches. To be honest I don’t even remember the match or who they played. What has made its mark in my memory is the utmost pride and support with which the Great Britain supporters greeted their team as they walked out onto the pitch. It was deafening and electric. The stadium music was pumping out “London’s Calling’ as we walked out for the team anthems. I remember grinning ear to ear. [Great Britain’s] Helen Richardson was standing to my left. As we ran out, she leaned over and said, ‘this is pretty amazing, isn’t it?’. All I could do was nod my head. The music, the crowd, it just left a permanent mark in my hockey memory.”

It was a similar story at Rio 2016. Baxter recalls the Argentina fans cheering on their team as they played Australia. It was a night-time match and the umpire says the crowds were beginning to make a noise a full hour before the teams ran out onto the pitch.

“The stadium was packed with Las Leonas fans, singing, chanting, banging, cazooing. I just really admire the support and dedication fans give to their countries.”

Leading into the Olympic Games, the umpires are under pressure to be at the top of their game. Baxter says both her physical and mental preparation for the two Olympic Games were full on, although for Rio she was dealing with a back injury and so the physical preparation had to be centred on managing that injury.

Following on from an experience such as an Olympic Games it is difficult to know life gets back to normality. Baxter is not alone when she says that the experience is life-changing.

“Umpiring at the Olympics gives you life experiences that you would never normally be opened to. Travelling; spending time in your own company; the mental pressure you put on yourself to do the game justice, let alone the pressure from the fans, athletes, coaches, people watching the game on tv, social media.

“I always put a lot of pressure on myself both as a player [Baxter was part of the national USA programme until 1996] and as an umpire. But I have realised I can only control so much. I’ve certainly learned to ‘breath’ – white cloud in, grey cloud out – and to keep a healthy perspective.”

And the self-deprecating umpire has this advice for those facing their own Olympic challenge next year in Tokyo: “Prepare for each game. No one match will ever be the same. Prepare before the match with your partner. Communication is key, especially with your umpire colleague. You’ll have umpires you have worked with many times and know their rhythm, timing, plan of action, and then you’ll have those you haven’t had as much. A good solid pre-game discussion is well worth the time for yourself, your partner and the players.

“Soak it in. Enjoy it all. Everything. Your bus trips to the venues, the walk to the stadium, your colleagues, your flatmates, the environment, the city, the people, the fans, every sport – absorb it all.”

On this day – 27 July 1992: The women of Spain and Germany battle to a 2-2 draw in their opening match of Pool A at the Barcelona 1992 Olympic Games, with Spain’s Teresa Motos scoring twice to cancel out a double from Franziska Hentschel. The two teams would meet again in the gold medal match, with Spain taking a famous 2-1 win on home soil thanks to an extra-time goal from Eli Maragall.