Supperrb.com™
Home Hockey 🏑Flashback to ‘64! FIH marks one year to go until start of...

Flashback to ‘64! FIH marks one year to go until start of postponed Tokyo Olympics

On 23 July 2021, exactly one year from today, the delayed Tokyo 2020 Olympic Games – which was due to begin this coming Friday but was postponed due to the COVID-19 global health pandemic – will finally begin, with the hockey competitions set to start a day later, on Saturday 24 July.

To mark the occasion, we step back in time to look at the hockey competition at Tokyo 1964, when Japan’s magnificent capital city hosted the first Olympic Games to take place in Asia. It was also the first Olympiads to feature Judo and Volleyball, two sports popular in Japan, and where future boxing world heavyweight champion Joe Frazier won gold despite competing with a broken thumb. Poignantly, the honour of lighting the Olympic flame was given to Yoshinori Sakai, who was born in Hiroshima on 6 August 1945, the same day that an atomic bomb was dropped on that city.

By the time of Tokyo 1964, the sport of hockey very much a fixture of the Olympic programme. The sport was making its tenth Olympic appearance and eighth in succession, having featured at every Games since 1928, an unbroken run that continues to this day. At the time still just a men’s competition – women’s hockey eventually debuted at Moscow 1980 – hockey was one of 19 different sports to feature at Tokyo 1964, with 226 athletes representing the 15 different nations that were all targeting a place on the podium.

The competition was played in three specially constructed hockey arenas in the Komazawa Olympic Park and marked the first time since Antwerp 1920 that all of the Olympic hockey matches took place at a single location. It provided the perfect setting for a superb event that would end with a dream final contested between two of hockey’s fiercest rivals, India and Pakistan.

Four years earlier, at the Rome 1960 Olympic Games, Pakistan ended India’s run of six successive Olympic gold medals. Before suffering that 1-0 defeat to the Green Shirts, India having won every Olympic hockey competition played since Antwerp 1928. Having lost against India in the final of the Melbourne 1956 Games, the triumph of 1960 was a hugely significant moment for Pakistan hockey, and they arrived in Tokyo determined to defend their title against an Indian team looking to reclaim their place at the summit of the sport. 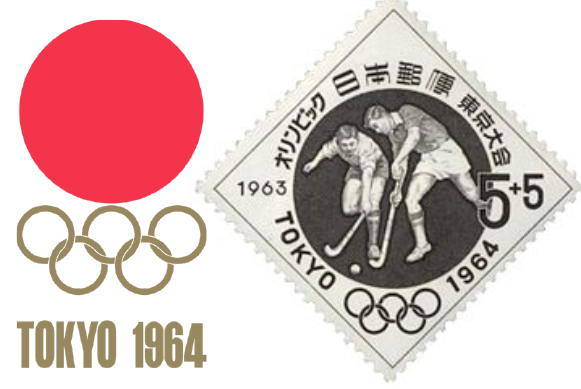 It came as little surprise that both teams finished top of their respective groups to reach the semi-finals. In Group A, Pakistan stormed to six wins out of six, scoring 17 goals and conceding just three as they saw off the challenges of Australia – who finished second, also reaching the semi-finals – Kenya, Japan, Great Britain, Rhodesia and New Zealand. India’s journey to topping Group B was tarnished by draws against the United Team of Germany – a side containing players from both East and West Germany – and Spain, although victories against the Netherlands, Malaysia, Belgium, Canada and Hong Kong ensured that the team captained by Charanjit Singh finished top of the pile, joined in the semis by second-placed Spain.

The semi-finals both took place on 21 October 1964, where Pakistan overpowered Spain 3-0 and India claimed a 3-1 victory against, Australia, who would later take the bronze medal with a 3-2 extra time win over the Spaniards.

The Tokyo 1964 gold medal match was played on 23 October 196, being the third successive Olympic final to be contested between these two giants of Asian hockey. Just like the competitions of 1956 and 1960, the gold medal would be decided by a solitary goal. India’s Prithipal Singh – who had scored eleven goals in the tournament – proved to be the architect, firing a blistering penalty corner shot towards goal that clipped the pads of the Pakistan goalkeeper before hitting the foot of helpless defender Munir Dar on the goal line.

The resulting penalty stroke was emphatically converted by Mohinder Lal, as described by team-mate and fellow 1964 Olympic gold medallist Harbinder Singh in a 2016 interview with India’s News 18 network.

“On the morning of the final, Mohinder Lal told me that he would get a penalty stroke”, recalls former striker Harbinder. “He was our penalty stroke specialist. He said he was going to put it into the roof of the goal because the Pakistan keeper wasn’t very tall, and it would be out of his reach. That is exactly what happened. His shot went like a bullet and hit the top of the net. It was unbelievable.”

Mohinder’s goal proved enough for India to regain their Olympic title, giving them their seventh gold medal in eight competitions. However, they would have to wait until Moscow 1980 before claiming an eighth, with Pakistan going on to win the gold medal at Mexico 1968 before West Germany and New Zealand took the respective titles at Munich 1972 and Montreal 1970 respectively.

As we announced last week, the hockey competitions of the XXXII Olympiad – which will be played at the purpose-built Oi Hockey Stadium in Japan’s capital city – will begin on Saturday 24 July 2021, concluding on Friday 6 August.

In line with what was planned for this year, the opening match of next year’s Olympic Games will be contested between the men of Japan and Australia, with the host nation facing a stern test from the 2019 FIH Hockey Pro League champions – Olympic gold medallists at Athens 2004 – on 24 July (09:30 local time). The opening match of the women’s tournament will be played on the same day, with reigning world champions and current world number one the Netherlands – Olympic champions in 1984, 2008 and 2012 – taking on India (20:45 local time). The men’s and women’s gold medal matches will take place on 5 and 6 August respectively.

The full match schedule of the Tokyo 2020 Olympic hockey tournaments can be found by clicking here. To download a PDF of the competition schedule, click here.

In recognition of the original competition dates for the Tokyo 2020, between 25 July and 7 August the FIH website will be looking back at over a century of hockey at the Olympic Games, with a series of feature stories, flashbacks and interviews with hockey Olympians, both past and present.