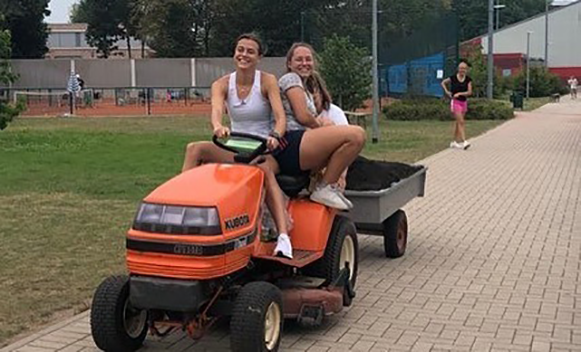 The opening matches of the resumed FIH Hockey Pro League will take place between Germany and Belgium men and women in the beautiful city of Düsseldorf.

Düsseldorf is the seventh largest city in Germany, and the capital of the North Rhine-Westphalia. It sits at the confluence of the mighty Rhine and its tributary, the Düssel. Most of the city sits on the right bank of the Rhine.

The city, which is to the west of Germany, is renowned for its fashion industry and art scene. It is also the home-town of avant-garde electronic band Kraftwerk. However, for two nights in September, for hockey and general sport fans, the hub of the city will not be found at the annual international fashion show or the Akademie-Galerie, which houses the internationally recognised Art Academy exhibition, but rather at the sports club at Am Seestern.

For three of the athletes who will be part of the German women’s FIH Hockey Pro League campaign, the turf at the stadium will have a familiar feel to it. Selin Oruz, Eli Gräve and Nathalie Kubalski are all members of the Düsseldorfer Hockey Club 1905, which plays in the first division of the German domestic league, the Bundesliga. All three will be both nervous and excited ahead of their return to international action.

“Finally, another international hockey competition,” says Oruz, who also captains Düsseldorfer HC. “The fact that the games are not only being played in Germany but also in Düsseldorf is a very special situation for Nathi, Eli and me. We will not underestimate the team from Belgium and will try to get back to our form as quickly as possible after the Corona virus break.”

Of course, with current restrictions in place, the stadium will not be filled with spectators. Under national association guidelines no spectators can be admitted to the ground and the players and officials will all follow strict protocols to ensure the safety of everyone involved in the matches.

While the players lament the chance to play hockey in front of family, friends and supporters, the overwhelming feeling is one of relief that competitive hockey can again take place. As Germany’s forward Christopher Rühr says: “We want to get back out on the pitch and we hope to perform at a high intensity. We will leave everything out there on the pitch and we just want to be able to have good games against Belgium.”

Although the fans will not be able to enjoy the famous German hospitality, particularly the Altbier, they will be able to follow every second of the action, either on television via DAZN, via the live reporting on the FIH website or through the soon to be launched FIH Watch.Hockey app.