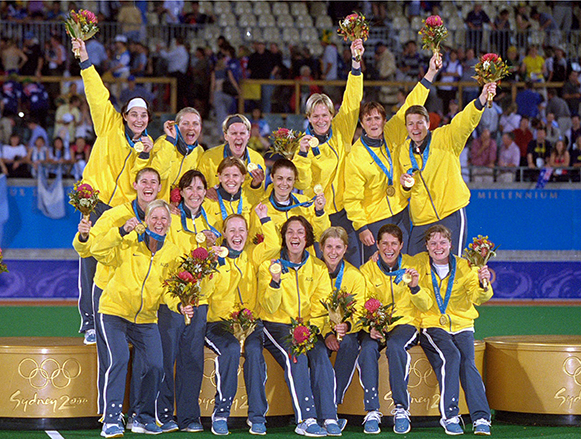 Between 1993 and 2000, the Australian women’s hockey team were leading the way when it came to women’s hockey. Two Olympic titles – in Los Angeles in 1996 and in front of a home crowd at Sydney 2000 – were the icing on the cake but they were not this team’s only achievements during this golden period.

A fascinating piece of writing by founding sports editor for the Wall Street Journal, Sam Walker has put that Hockeyroos team as one of the top sports teams of all time, sitting among other legendary sides such as the New York Yankees of 1949-1953, the New Zealand All Blacks team of 1986-1990, the all-conquering Cuba women’s volleyball team of 1991-2000 and the Ice Hockey champions the Montreal Canadiens who ruled the ice-rink from 1955-60.

This is hallowed company and one that easily accommodates the team that included players such as Alyson Annan, Rechelle Hawkes, Nikki Hudson and Katrina Powell.

“I wanted to study teams that had sustained excellence, that had won for a long period of time,” explained Walker. “So I wound up setting the bar at a minimum of four years of dominance. [To be in the mix] a team [also] had to have done something unique, whether it was the number of titles they won or their winning percentage over time.”

The double Olympic gold medallists certainly did something unique: in their new look bodysuits and with their high intensity and ruthless approach on the pitch, their emergence was thought by many to be a watershed moment in women’s hockey.

In his book, ‘The Captain Class: A New Theory of Leadership’, Walker suggests that the teams that made his list were not necessarily, on paper at least, the very best, most talented players. By the same token, the teams were not always the best when it came to tactics or strategy. Money and resources were ruled out – the fact hockey and volleyball are on the list alongside football and baseball teams is proof that it is not all about money.

What emerged from the research was the importance of characters in the team and the style of leadership adopted. Most important was the leadership qualities of the captain – at the 2000 Sydney Olympics this was Alyson Annan.

“I thought that a leader had to be a superstar, someone who could put the team on their back and then win the game single-handedly when they needed to,” says Walker.

“[But] they were really not superstars for the most part and they really didn’t like attention. Many of them were not charismatic at all, they preferred to avoid attention, to labour in the shadows.”

Walker adds that a lot of people think that leadership is about your output, but it’s really about your input, and what you do for that team behind the scenes.

“These captains were willing to do whatever it took to help the team win, whether they got credit for it or not,” he says. “You have to really be willing to sacrifice of yourself and then do all those little acts of service and labour behind the scenes to help the team.”

Whether Walker was right in his assessment of the importance of Annan’s leadership qualities is up for debate. Most people would agree that a combination of talented and committed players, an extraordinary coach who constantly strove for perfection in the shape of Ric Charlesworth, and Annan’s brilliance and instinct for goalscoring were the three cornerstones on which the team’s success was built.

Whatever the reasons, the Hockeyroos of 1993-2000 were dominant, successful, mesmerising to watch and groundbreaking as a women’s sports team.

The New York Times described the 3-1 victory over Argentina: “The Hockeyroos may sound like a name from Disney or a cuddly mascot, but they are neither: they are a team that is as tough as a hammer’s head and very much real. This is the Australian women’s field hockey team, a group of unflinching, unrelenting players who have become their nation’s most dominant international team. With a following that goes well beyond just a cult niche, they have left their country dizzy with their success over the last decade.”

Sydney 2000: A second successive (and a third in total) gold medal came the way of Australia women on home soil, with the Hockeyroos in simply electrifying form. Their most notable result on-route to the final was a devastating performance against the Netherlands, destroying their illustrious opponents 5-0. They then took gold by defeating Argentina – featuring rising superstar Luciana Aymar – 3-1 in the competition final. Australia men came agonisingly close to reaching the final themselves, losing on penalty strokes to the Netherlands in the semis. The Dutch men went on to defend the Olympic title they won at Atlanta 1996 by defeating Korea, also on penalty strokes.

On this day – 3 August 2012: It was an interesting day in Pool B of the men’s competition at London 2012, with the two teams who would meet in the gold medal match both recording fine wins. Eventual silver medallists the Netherlands proved too strong for New Zealand, with Billy Bakker scoring twice in a 5-1 victory before Florian Fuchs hit a hat-trick in Germany’s 5-2 thrashing of India, a significant step in what was a successful defence of the Olympic crown won at Beijing 2008.