Entering the ninth day of play, the men’s and women’s team competitions started with Ma Long, Xu Xin and Fan Zhendong, alongside Chen Meng, Sun Yingsha and Wang Manyu all in action.

At 7.30 pm in the evening, the first round of the men’s team event officially started. The Dragon himself, Ma Long, was making his first appearance in the entire tournament; he had previously withdrawn from the individual competition due to injury.

Next, in the second match-up, Ma Long faced 17-year-old Zeng Beixun from the Beijing team. Ma quickly opened the score 7-0 and won the first game 11-5. Zeng decided to showcase his talent in the second, making a brave effort. Ma was clearly short of match-fitness, and thus made many unforced errors.

“I had some chances in the third game and did not take them. Playing one more game will also help me in the next match. I finally changed the backhand serve in the match and that helped. My mentality was ‘I feel like I have to practise more.’” Ma Long

The third and final match was played between Fan Zhendong and 15-year-old Lin Shidong, a young player specially selected for this simulation. In the first battle between the two, Lin started the game vigorously; the momentum of “newborn calves are not afraid of tigers” in effect. However, Fan was in no mood to let him settle and won 11-5.

This established the overall trend of their match-up. Fan was in full flow and recorded a comfortable 3-0 (11-5, 11-4, 11-8) win. After learning that he is Lin Shidong’s idol, Fan inevitably commented with emotion:

“I was also this young when I joined the national team, and many seniors were my idols. This is also a kind of inheritance in our team. We don’t communicate much with each other, but this – the first and second teams training together – is a good touch and opportunity for all of us.” Fan Zhendong

As for the women’s leading team, today’s opposition was composed of Qi Fei, Chen Yi and Zang Xiaotong. In the first doubles match, Sun Yingsha and Wang Manyu faced Qi Fei and Zang Xiaotong. Sun and Wang – who faced each other for the women’s singles medal earlier this week – won 3-1 (11-7, 7-11, 11-3, 11-5). Throughout the four games, Sun and Wang quickly adjusted the pace of play according to the situation, regained control wherever needed, and locked the victory in style.

In the second battle of the day for the women’s team, Chen Meng defeated Chen Yi 3-0 (11-4, 11-7, 11-3) helping the team further expand its lead. In the third tie, Wang Manyu experienced some difficulties in the match-up against teenager Qi Fei. 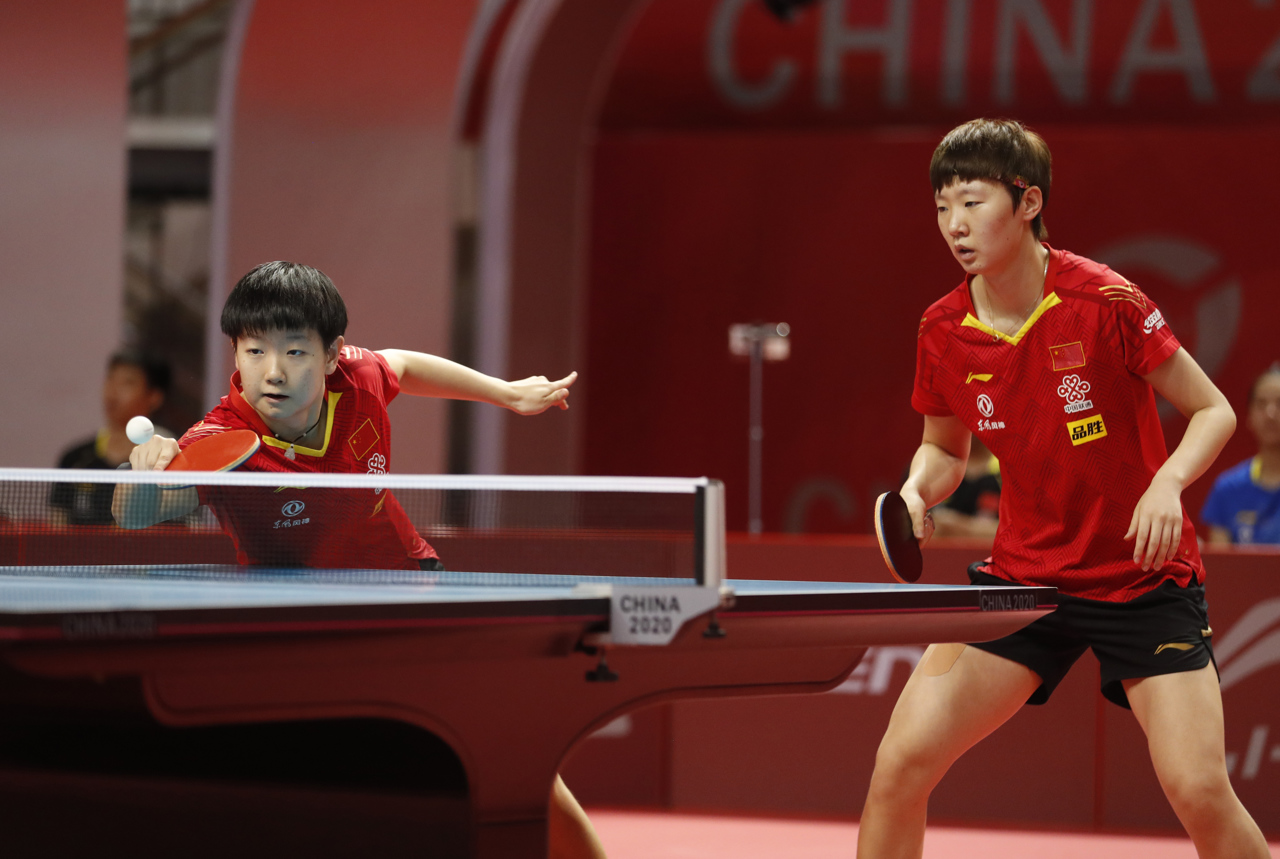 Sun Yingsha and Wang Manyu started the team event with much to look forward to.Wang recorded the first two games with ample strength, winning 11-5 and 11-9. In the third game, she was at the match point when the score read 10-8. However Qi Fei was not in any mood to settle, scoring four points in a row Qi pulled back the game, winning 12-10 and showcasing her immense potential.

In the fourth game, Qi started with the same momentum and took a 5-1 lead. Fortunately for Wang, she managed to recover to record five points in a row to overtake her opponent and finally win 3-1 (11-5, 11-9, 10-12, 11-7). After the match, Sun Yingsha, who only played a doubles with Wang Manyu, expressed the view that after not the best of starts, they gradually complemented each other as the match progressed, finding the form that had enabled them to become world champions last year in Budapest.

Positive from Sun Yingsha, it was similar from Chen Meng who was pleased she had acclimatised quickly, had moved well and gained confidence. Wang Manyu, who lost a game to Qi Fei, gave her opponent a great compliment:

“I was a little anxious when I took a 10-8 lead in the third game, but my opponent recovered well.” Wang Manyu